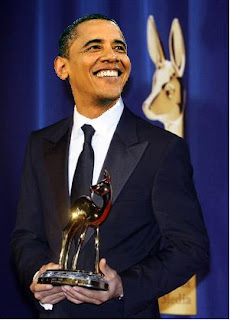 Obambi: You see I banned something
in relation to Islam and the Jihad!
He is effectively removing any means whatsover to combat the jihad against the West. Removal of any reference to Islam and the Jihad in relation to Islamic-jihadi terrorism is a calculated move that rests heavily on the failed meme that, if one denies that the radicals are reprensting Islam, they will over time, be reduced to the margins of Islamic society.
Of course what this actually amounts to is denying the obvious, that Islam is a violent, totalitarian, misogynist creed that seeks world domination, and that not only Wahhabists are represented in the jihadists’ world view, but also the salafists which dominate Al-Azhar University in Cairo Egypt, the home of the Islamic thought in the Muslim world.
There is very little difference between al-Qaida’s goals and that of the Sheikhs’ and clerics’ who sit in authority over Islamic doctrine and rulings, just in methods. Anyone who says differently is splitting hairs, it’s like discussing whether a Salafist or a Wahhabist is more intolerant to women and to gays. KGS

WASHINGTON — President Barack Obama’s advisers will remove religious terms such as “Islamic extremism” from the central document outlining the US national security strategy and will use the rewritten document to emphasize that the United States does not view Muslim nations through the lens of terror, counterterrorism officials said.
The change is a significant shift in the National Security Strategy, a document that previously outlined the Bush Doctrine of preventative war and currently states: “The struggle against militant Islamic radicalism is the great ideological conflict of the early years of the 21st century.”
The officials described the changes on condition of anonymity because the document still was being written, and the White House would not discuss it. But rewriting the strategy document will be the latest example of Obama putting his stamp on US foreign policy, like his promises to dismantle nuclear weapons and limit the situations in which they can be used.
The revisions are part of a larger effort about which the White House talks openly, one that seeks to change not just how the United States talks to Muslim nations, but also what it talks to them about, from health care and science to business startups and education.