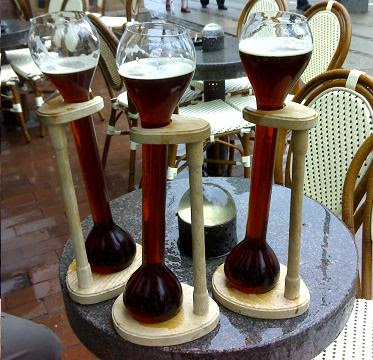 Picture taken in Copenhagen Denmark last year
The Tundra Tabloids proudly presents an essay by fellow Scandinavian Counterjihad writer, Fjordman. After a recent discussion with the TT concerning beer, Fjordman kindly promised to explore the history surrounding the delightful beverage and write an essay about it. This is the product of Fjordman’s discoveries.  KGS

According to historian Patrick E. McGovern, the world’s total annual production of pure alcohol for beverages is projected to reach 20 billion liters by 2012, enough to provide every person on Earth with a couple of liters each of pure alcohol, more if you consider illegal production and home-brewed beverages, which are made in substantial quantities. We should also take into account that many adults don’t drink alcohol at all, and that most fermented beverages have an alcohol content of merely 3 to 13 percent. The global production of beer has surpassed 180 billion liters per year and is expected to reach 200 billion liters before 2015, of which the rapidly growing economy of China currently produces more than 20%.
We have little archaeological evidence from the Paleolithic era regarding this, but McGovern believes that this is undoubtedly the time when humans first experimented with alcoholic beverages, as they relished their fermented fruit juices and came to apprehend their ecstasies and dangers. He speculates whether psychoactive drugs, among them alcohol, played a role in the ritual life of Paleolithic shamans associated with Ice Age grottos. As he states in his book:
Uncorking the Past: The Quest for Wine, Beer, and Other Alcoholic Beverages:
The Palaeolithic cave paintings, like so many Sistine Chapels, must have been a monumental task in their day, especially when one considers that they were accomplished with extremely limited technology in pitch- black, nearly inaccessible locations. The motivations for devoting so much time and energy to otherworldly activities were probably similar to those of today. The needs of Homo sapiens include social rituals that bring the community together, artwork that symbolizes the workings of the mind and nature, and religious rituals that give human experience meaning and coherence.
A fermented beverage or drug can enhance these experiences and stimulate innovative thought. To the people of the Palaeolithic, ceremonial observances, heightened by an alcoholic beverage and other techniques for achieving an altered consciousness, might have been viewed as assuring good health, placating the spirits of invisible ancestors and other spirits, warning of danger, and predicting the future.”
Those attempting to make Paleolithic fermented beverages would have needed access to some form of container. They could have used hollowed-out wooden containers or bags made of leather, but the oldest known examples of pottery have been found in a cave at Yuchanyan in China dating back to around 16,000 BC.
Interestingly, this is thousands of years before we have evidence of agriculture anywhere. The previous oldest-known example of pottery was found in Japan. Pottery may well have been produced by Ice Age foragers several places in Northeast Asia, from Russia via China to Japan, which was then connected to mainland Asia. Alcoholic beverages made from fruits or berries still enjoy some commercial importance in cooler climates.
Wine” is usually defined as a beverage made from grapes, so fermented beverages derived from other fruits are called fruit wines. When the sugar source for fermentation is apple, the beverage is called a cider; perry if it has been made of fermented pear juice. Cherry wines are made in Britain, Scandinavia, the Netherlands, Ireland and Poland and are popular among home winemakers. Fruit wines from blueberries can be bought in Norway and Finland. Plum wine has been made in China, Korea and Japan for centuries.
As author Ian Hornsey says in A History of Beer and Brewing, some raw materials of fermentation (sources of sugar) were naturally available to pre-Neolithic peoples, primarily wild berries and fruits, tree sap and above all honey. However, it is unlikely that reproducible beers could have been extensively brewed and enjoyed until after the invention of some sort of pottery vessels. In temperate zones there were relatively few abundant sources of sugar:
“Thus, for much of Europe, at least, honey is the logical candidate for being the basis of the original fermented beverage, some sort of mead. According to Vencl (1991), mead was known in Europe long before wine, although archaeological evidence for it is rather ambiguous. This is principally because the confirmed presence of beeswax, or certain types of pollen (such as lime, Tilia spp., and meadowsweet, Filipendula ulmaria), is only indicative of the presence of honey (which could have been used for sweetening some other drink) – not necessarily of the production of mead.

For more southerly parts of Europe, and for the Eastern Mediterranean and the Near East, the fermentation of the sap and fruits of tree crops, such as the date palm (Phoenix dactylifera L.), offers the most likely means by which alcoholic drinks were first produced with any degree of regularity. The date palm was one of the first fruit trees to be taken into cultivation in the Old World (ca. mid-4th millennium BC), and its sap and fruits contain one of the most concentrated sources of sugar (60-70%) known on the planet.”