Skip to content
Home
/
2010
/
April
/
5
/
Jesus
/
TROP: CHRISTIANITY AND ISLAM: A COMPARISON BETWEEN MOHAMED AND JESUS…….
Facebook
Twitter
Google+
LinkedIn
Pinterest
This is brilliant. For those of you who don’t know, The Religion Of Peace website was created to enlighten the Muslims themselves about what was being done in the name of their religion.

Since that time, it became clear to the founders of TROP that very few from the Muslim community were either startled or ashamed by all the violence being perpetrated in the name of their religion, being more interested in defending themselves through apologetics.

So TROP just stopped trying to convince Muslims, and took to archiving all the incidents of Islamic related/inspired violence for the rest of us, as well as offering excellent pages of relevant information such as the following. KGS 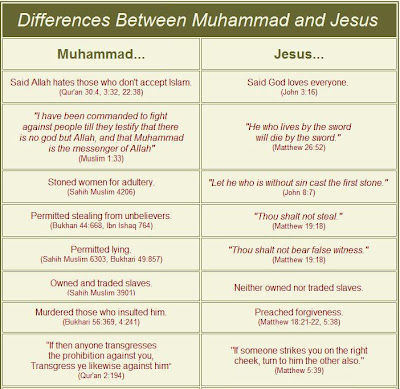 TheReligionofPeace.com
Christianity and Islam:
A Side by Side Comparison*
* It is not the purpose of this site to promote any particular religion, including Christianity. However, we do enjoy refuting nonsense, such as the claim that Muhammad and Jesus preached a morally equivalent message, or that all religion is the same.
“Allah:” “I will cast terror into the hearts of those who disbelieve. Therefore strike off their heads  and strike off every fingertip of them.” (Qur’an 8:12)
Muhammad:”Fight everyone in the way of Allah and kill those who disbelieve in Allah.” (Ibn Ishaq 992)
Jesus:”Thou shalt love thy neighbor as thyself.”(Matthew 5:14)
Each year, thousands of Christian homes and churches are torched by Muslim mobs, and hundreds of Christians, including dozens of priests, pastors, nuns and other church workers are murdered at the hands of Islamic extremists. The so-called justification varies, from purported “blasphemy” and evangelism violations to the outright establishment of an Islamic state. Innocent Christians have even been killed by devout Muslims over cartoons and rumors of “insult” to Islam.
Yet, there is little if any violent retaliation from religious Christians, even after the most gruesome of Muslim crimes (such as the 2010 rape, torture and murder of a 12-year-old girl by a respected lawyer in Pakistan, or the burning alive of an entire family of Christians there only five months earlier). Neither is there is any significant deadly terrorism in the name of Jesus, as there is in the stated cause of Allah each and every day. Muslim clerics in the West do not fear for their safety as do their Christian counterparts.
The “Christian world” and the Islamic world contrast sharply in other ways as well, from the disparate condition of human rights and civil liberties to economic status. An astonishing 70% of the world’s refugees are Muslims – usually seeking to live in Christian-based countries.
While Western societies take seriously “scandals” such as Abu Ghraib and Guantanamo (where no one has actually been killed), Muslims routinely turn a blind eye to their own horrible atrocities, even those committed explicitly in the name of Allah. The Muslim world has yet to offer a single apology for the tens of millions of lives consumed by centuries of relentless Jihad and slavery.
These sharp differences are almost certainly rooted in the underlying religions, which begin with the disparate teachings of Jesus and Muhammad…