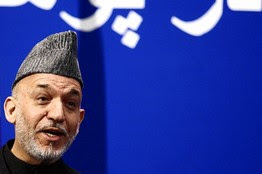 Opium Karzai: Hey, didn’t ya know?
I was for the Taliban before I was against them
To be placed squarely into the “pure irony” category. Actually this is a classic case of the pot calling the kettle black, Karzai heads an incredibly corrupt government, but when it’s all said and done, little divides the Musulman from the other. It’s a case of splitting hairs. Leave the country and follow it from the air, if training camps form, drop in surgical units to eliminate them.  KGS

KABUL, Afghanistan—President Hamid Karzai lashed out at his Western backers for the second time in three days, accusing the U.S. of interfering in Afghan affairs and saying the Taliban insurgency would become a legitimate resistance movement if the meddling doesn’t stop.
Mr. Karzai, whose government is propped up by billions of dollars in Western aid and nearly 100,000 American troops fighting a deadly war against the Taliban, made the comments during a private meeting with about 60 or 70 Afghan lawmakers Saturday.
At one point, Mr. Karzai suggested that he himself would be compelled to join the other side —that is, the Taliban—if the parliament didn’t back his controversial attempt to take control of the country’s electoral watchdog from the United Nations, according to three people who attended the meeting, including an ally of the president.