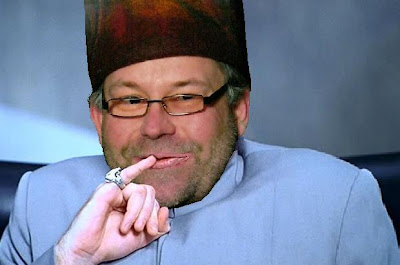 Richard Järnefelt: Hmmmm, this situation affords
another golden opportunity to stick it to the Jews

What’s with this Leftist clown? In 2009 Richard Järnefelt slandered Jews in a comment on his blog, which also called for the invasion of Israel, which he considers a mistake (Genocide anyone?). He then supposedly apologizes for his remarks while complaining to the TT, threatening to file a complaint with the police.

Järnefelt then  writes another comment on his blog which once again, compares the Israeli government to the Nazis, while claiming it was someone else (a friend?) using his computer. This makes him not only a liar, but a very bad liar as well. All of what he has done to date, fulfills the EU’s own working definition of anti-Semitism, so perhaps that’s the reason why the Helsinki police were not interested in taking his complaint seriously.

Now he comes out again swinging his bat at the Jews over the recent flap between the Roman Catholic Church and world wide Jewish organizations concerning the statements from the Pope’s own personal preacher, Father Raniero Cantalamessa. The preacher recently apologized for saying that criticism of the Catholic Church over child sex abuse was as bad as anti-Semitism.

Such a statement deserves the wide condemnation it received, but not in the opinion of the serial anti-semite, Richard Järnefelt, who delivers yet another broadside against Jews world wide. This creep also has the nerve to insist he’s not a Judeophobe since he helped Jews in the Soviet Union over a couple of decades ago.

Raniero Cantalamessa’s comparison to the Holocaust was not in any way offensive. He just raised his own experience of persecution on the same footing.

Always in the opinion of every demanding and complaining Jew, this shouldn’t be done, on the contrary, their suffering is the world’s largest in the history of suffering because it’s their “registered trade mark.”

Similarly, neither in the world’s future, no one, of course, can ever suffer as much as the Jews have suffered …

It is a great pity that Cantalamessa apologized, because there was nothing to apologize about. Westerners falling on their face before Judaism, the Jews and the Jewish state is pathetic and disgraceful. 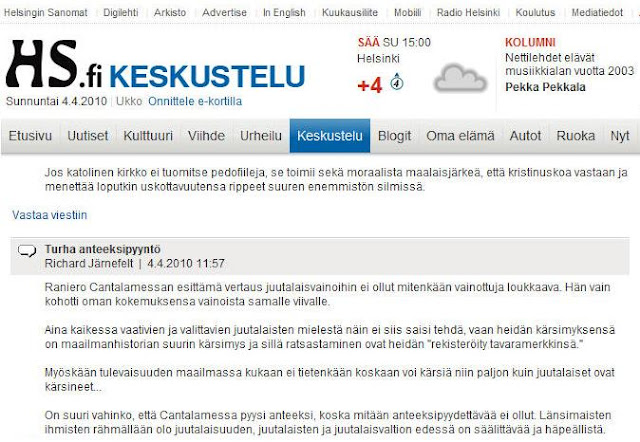 Richard Järnefelt is clearly an anti-Semite. He believes that Jews use the Holocaust to drum up sympathy for themselves, while denying the suffering of others. You know, the big evil sinister Jew, manipulating world sympathy for his/herself at the expense of everyone else. Never mind the fact that the Catholic priest actually apologized, as any rational minded person would agree was the right thing to do.

The Catholic Church itself bears the brunt of its own problems, not the victims, nor those who are outraged over the church’s role in covering up the cases of pedophilia by keeping the perpetrators on the books, and not turning them over to the authorities. For Richard Järnefelt, this fails to register altogether because he has the Jew in his cross hairs, causing his brain to lose sight of the sound logic just mentioned. What a moron.

NOTE: He also sucks as a piano player:

This Jewish girl leaves Järnefelt in the dust.