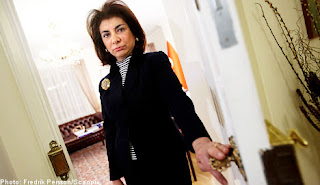 Turkish Ambassador Zergün Korutürk:
Like the good dhimmis the Swedes are
they came around to our way of thinking

They’re disgusting. History, I hope, will judge these people as the immoral clowns that they are. KGS

Turkish ambassador arrives back in Sweden

Turkey’s ambassador to Sweden, Zergün Korutürk, returned to her post in Stockholm on Tuesday, two weeks after she was recalled over the Swedish parliament’s recognition of the Ottoman Turk massacre of Armenians as genocide.
Speaking to reporters before her departure to Stockholm, Zergün Korutürk
said her return became possible after the Swedish government distanced itself
from the parliament’s decision.
“The Swedish government has clearly said that the decision would not be put into practice,” Korutürk was quoted by the Anatolia news agency as saying.
Ankara still expects Stockholm to take steps to “compensate for this error,” she said. “I hope the Swedish government will do everything in its power.”
Ankara had announced last week that the ambassador would return to Stockholm soon.
Korutürk was summoned back to Ankara on March 11th after the Swedish parliament voted by a narrow margin to recognise the Ottoman massacres of Armenians during World War I as genocide, despite the government’s advice not to do so.
Swedish Prime Minister Fredrik Reinfeldt later expressed regret over the parliament’s decision to Ankara, a move which his Turkish counterpart Recep Tayyip Erdogan called “very positive”.
Foreign Minister Carl Bildt also said that the position of his government, which supports Turkey’s entry into the European Union, “remains unchanged”.
The Swedish vote came in the footsteps of a March 4th vote by a key US Congress panel that branded the massacres as genocide, also prompting Ankara to recall its ambassador there.
Last week, Turkish Foreign Minister Ahmet Davutoglu indicated that he was not yet ready to send his ambassador back to Washington as the two cases were different.
“The Swedes clearly apologised,” he said.