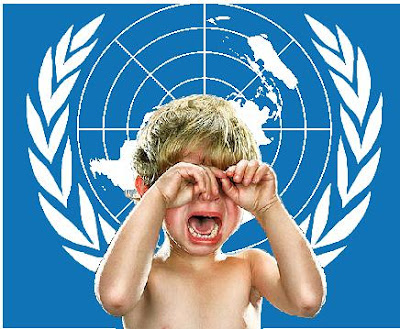 When the Organization of the Islamic Conference speaks of defense of “religions”, just remember what they really mean…..protecting Islam from criticism. It’s a joke. The OIC pretends to be a bridge between the Islamic states and the rest of the world, but has member states that not only allows and funds vitriolic anti-Semitism, their governments have institutioanlized discrimination against their Christian minority communities.
Christian Arabs are leaving in droves from all over the Arab Middle East, the only state in which they thrive is in the Jewish state of Israel. The Sudanese government butchered hundreds of thousands of Christians, so to in Nigeria, but when has the OIC ever seen to a legislation adopted by the UN General Assembly against the treatment of non-Muslim? Crickets chirping.
This is just one more step in the OIC’s long term agenda in securing an international agreement that forbids the citicizing of Islam. The same bigoted organization mind you, that refuses to condemn Muslim anti-Semitism, because they refuse to believe that no Muslim, good or bad, can be anti-Semitic, only the non-Muslim. KGS

GENEVA, MARCH 25 – The United Nations Council for Human Rights today approved by a narrow margin the controversial resolution on “slandering religion” promoted by the Islamic Conference (OIC) which targets Islamophobia first and foremost. The text, which also condemns “bans on building minarets” as decided by a Swiss referendum, passed with 20 votes in favour and 17 against, including those of Italy, and eight abstentions.
The US and the European Union came out clearly against the resolution, while condemning discrimination on religious grounds. China and Russia voted in favour. The resolution, which was promoted by Pakistan in the name of the OIC, condemns the “recently adopted discriminatory bans on minaret construction. These are symptoms of deep Islamophobia against international obligations”, the text states, without explicitly mentioning the vote in Switzerland.
The resolution also deplores “all acts of psychological and physical violence and all acts of aggression, and incitements to commit them, against all persons on grounds of religion or convictions”. The text also expresses “profound concern at the persistence of serious stereotyping” in the media which targets some religions, their followers and “holy figures” as the “intensification of the campaign of defamation of religions and incitement to religious hatred in general”, in particular regarding “Muslim minorities following the tragic events of September 11 2001”.
The concept of “slandering religion” has been the subject of debate at the UN for years and it is being resisted by many Western countries. During the debate leading to the vote, the European Union pointed out that the concept of slandering religion was not a relevant one given that international human rights “protect individuals in exercising the freedom of religion and faith and do not need to protect systems of faith as such”.
The US has explicitly condemned the use of the concept of slandering religion in some countries as a justification for censorship, criminalisation and in some cases deadly attacks on political, racial and religious minorities. “We cannot believe that a ban on the freedom of expression can promote tolerance”, the US said. This is not the first occasion that the UN Council has approved such a text: although resolution refers several times to “all religions” or to “some religions” the only religion actually mentioned is Islam.