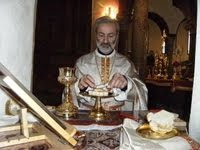 Msg. Mtanious Hadad: Let’s pretend that
the jihad doesn’t exist!
Europeans and other Westerners, should reject out of hand anything stooges such as, Msg. Mtanious Hadad, and like ilk are saying. They’re just repeating the Muslim narrative from their traditional subservient role of a dhimmi, or a non-Muslim second class citizen.
People like this promote the myth of the “golden era” of Islam where everyone lived as brothers in blissful harmony, which was never the case. look at how he glosses over the Islamization of the Levant, Turkey and the Maghreb, all areas once belonging to the Christianized world. The fact that he left that out but spoke of the Crusades as reasons for bad relations between Christian and Musulman, proves that he’s pushing the Muslim narrative and agenda.
Read the article, but keep a barf bucket handy. KGS
GREEK MELKITE CHURCH IN ROME AS A BRIDGE TO ISLAM

[…] What we would rather do is promote ”an encounter between the Western Church and the Eastern, which is integrated in European culture, as well as in Arab culture”. Also in order to show that ”not every Arab is a Moslem and not every Moslem is a fanatic”. Which is the thinking behind the decision to celebrate Mass in Arabic every Thursday afternoon: a religious service combining the 6-7th Century liturgy of St John Chrysostomos (in which ”the Eastern Church does not read, but sings the divine liturgy”, as a pamphlet explains) and the language of the Koran. ‘
‘Interreligious dialogue arose in the East as early as the 7th Century,” the Syrian-born Father explains, ”good relations between the faiths are not a recent invention. Divisions had their own causes, such as crusades and economic interests. And dialogue is not about a Sheikh meeting a Patriarch in a 5-star hotel, but about being among the people, with the Koran and with the Gospel, without proselytising and respecting the other”. But how far is Italian society capable of accepting others?
”There is still too much ignorance here, which instils fear. We have to get to know Islam, not to fear it. But this also goes for Moslems, who may be ignorant of Christianity too, and be ignorant of the existence of Christians in the Arab world, as happens in Algeria and in Morocco. But in Syria, Lebanon and in Palestine we have been living together for centuries”. And what would you say to a figure from the Northern League, such as Calderoli, the man with the anti-Islam t-shirt?
”I would invite him for coffee and then I would ask him: what do you want to do about the ten thousand Italians who have converted to Islam, take away their identity cards? A true Christian has no need to exclude the other, and exclusion breeds anger and fanaticism”. As for the persecution of Christians in the Middle East: ”We are reverting to religious fanaticism everywhere at the moment, as in Lebanon, but there is no need to stress these aspects”.
Meanwhile, the church of St. Maria in Cosmedin is due to hold the Synod of Bishops of the Eastern Churches in October. ”We shall be present, and we hope that our Patriarch, Gregoire III Laham, will do the same as Maximus IV at the Second Vatican Council and say something on the subject of our opening to other churches and to the Arab community”.(ANSAmed).