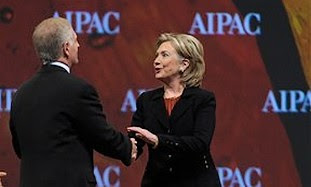 Hillary: Oh and by the way,
it’s a mistake that conforms to our policies
The Tundra Tabloids refuses to believe that the “mistake” by Hillary Rotten Clinton was unintentional, she sees her mission in rehabilitating the Fattah’s image in spite of common sense and the reality. Fattah and Hamas are two sides of the same terrorist coin. KGS

This message to the Palestinian Authority from the US, if not immediately rectified, will have devastating implications for peace.
Someone in the State Department is giving Secretary of State Hillary Clinton imprecise information about Palestinian Authority Chairman Mahmoud Abbas.
On Monday night, in her speech to AIPAC, Clinton condemned Hamas for renaming “a square after a terrorist who murdered innocent Israelis,” saying it was “wrong and must be condemned.”
On the other hand Clinton “commended” PA Chairman Abbas.
Clinton’s condemnation of Hamas alone, because the municipality that named the square after the terrorist is run by Hamas, was erroneous. For in fact, it has been the Palestinian Authority and Mahmoud Abbas, not Hamas, who have been leading the Palestinians in glorifying Dalal Mughrabi, the terrorist bus hijacker who was responsible for the killing of 37 civilians in 1978, whom Clinton accurately called the “terrorist who murdered innocent Israelis.”
Palestinian Media Watch has documented the continuous Mughrabi veneration by Abbas and the Palestinian Authority in recent years, both in connection to the square near Ramallah in the West Bank and in many other contexts.
THE FOLLOWING are 15 examples of the glorification of this one particular terrorist, Dalal Mughrabi, five by Abbas himself, five by the Palestinian Authority or its leaders, and five by Fatah or its leaders:
1. It was Abbas himself who defended the naming of the square after Mughrabi: “I do not deny it. Of course we want to name a square after her.” [Al-Hayat al-Jadida, Jan. 17, 2010]
2. It was Abbas himself who on December 31, 2009, honored that same terrorist by sponsoring a celebration of her birthday. [PA TV (Fatah) News, Dec. 29, 2009]
3. It was Abbas’s Fatah youth movement who prepared the Mughrabi square for the ceremony. [Al-Hayat al-Jadida, March 8, 2010]
4. It was Abbas himself who funded a computer center after that same terrorist. “Present at the event were President Mahmoud Abbas’s advisor… inaugurating the [Dalal Mughrabi] center, funded by a contribution from the President’s [Abbas’s] Office.” [Al-Ayyam, May 5, 2009]
5. It was Abbas who sent his secretary-general of the Presidency, Tayeb Abd Al-Rahim, to speak in his name, and called the terrorist the “bridge over which we pass on the way to our freedom.” [Al-Hayat al-Jadida, March 9, 2010]
6. It was Abbas himself who sponsored high school graduation ceremonies in honor of the same terrorist Mughrabi at which “the representative of the President [Abbas] … reviewed the heroic life of [Mughrabi] the Shahida (Martyr).” [Al-Hayat al-Jadida (Fatah), July 24, 2008]
7. It was Abbas’s minister of culture, Siham Barghouti (Fatah) who defended naming the square after the terrorist: “Honoring them [the martyrs] this way is the least we can give them, and this is our right.” [Al-Ayyam, January 11, 2010]
8. It was Abbas’s PA TV that opened its broadcasting this month on March 11, the anniversary of the attack, by praising the terror attack as: “A glorious chapter in the history of the Palestinian people.” [PA TV Fatah March 11, 2010]
9. It was not Hamas but Fatah, the party headed by Abbas, which decided to go ahead and dedicate that square after “a terrorist who murdered innocent Israelis” and it was Fatah leaders who held up a banner which read: “On the anniversary of the Coastal Road Operation we renew our commitment and our oath that we will not stray from the path of the shahids (martyrs), Shahida (Martyr) Dalal Mughrabi Square, Shabiba (Fatah) students’ movement] [Al-Quds, March 12, 2010]
10. It was Abbas’s Fatah Central Committee member Tawfiq Tirawi who said at the square’s dedication: “We shall not submit to any threats, and we are here today to celebrate our history and our battle in naming the square after Mughrabi.” [Al-Hayat al-Jadida, March 12, 2010]
11. It was Abbas’s Fatah spokesman Dr. Faiz Abu Aytah who emphasized “the right of Fatah, of the Palestinian Authority, and of the Palestinian people to celebrate the anniversary of her [Mughrabi’s] martyrdom… Fatah is proud of Dalal’s affiliation with it as a movement.” [Al-Hayat al-Jadida, March 11, 2010]