If you call for Jews to be killed
make sure they’re Israelis
There was a recent brouhaha in the Finnish media caused by Finn Church Aid director, Antti Pentikäinen, who claimed, (without giving one concrete example of it) that Finnish Christian support of Israel contains radical elements that have made threats against himself and fellow colleagues, who support aiding the Arabs (called Palestinians) through the Lutheran Church run program.
Daniel, who runs the Finnish-Swedish language Israelnyheter blog, forwarded the following op-ed that appeared in the Swedish paper, Dagen on the 17th of March. The person writing the op-ed was among those who attended a lecture offered by the Christian Council of Sweden (SKR), which dealt with the problems facing the Arabs living in Judea and Samaria.
The tone of the lecture, combined whíth what took place during the Q&A, speaks loudly on what these Leftist run organizations deem as “normal discource” on the Arabs’ conflict with the Jewish state of Israel. The lecturer, after giving a highly biased report against Israel, didn’t condemn out right, the person’s call to murder Jews, but rather there should be a difference made between Jew and an Israeli.
EAPPI is an international organization that brings Westerners to the Arab areas in Judea, Samaria and in times past, Gaza, with the sole purpose to indoctrinate them with Palestinian propaganda against Israel, then return to their home countries and dissimenate the nonsense that they’ve “learned”. The lecture no doubt, was a part of that propaganda process.
We’ve had the exact situation here in Finland,   with EAPPI volunteers going to the region, get indoctrinated by the Lutheran Bishop of J’lem, Munib Younan and his network, then return to Finland to hit the speaking circuit, in which they present the conflict in a grossly one sided way. It’s worked that way for decades. Now they’re taking it one step further, with the head of Finn Church Aid stating Finnish Christian supporters are “radicalized”, with no proof being offered.
So, contrary to the methods of Antti Pentikäinen who offers no evidence to support his claims of Christian supporters of Israel promoting violence, the TT provides an eyewitness account of Ewa Jonsson, who witnessed a pro-Palestinian extremist in a church sponsored lecture, calling for the murdering of Jews, and not be thoroughly condemned for it. Also, the SKR organizers of the lecture, by default, sanctioned the call for the murder of Jewish Israelis. It’s mighty sick time we are living in.

SKR has major responsibility for the image its companion gives

In the small parish hall in southern Vätterbygdens had gathered to listen to a lecture by an ecumenical companion who has been in the West Bank to make life easier for the Palestinian population of the village which is surrounded by illegal (TT: Not illegal) outposts to the Israeli settlements.
Lecture began with a declaration that the Christian Council of Sweden (SKR) is neutral and does not take political positions. Then we got to listen to the stories of three people who were reinforced by images from the village and the settlers who harass villagers. It is true that some settlers, especially among those who live in illegal outposts, (TT they’re not illegal) even in the Israeli point of view, can behave aggressively, unpleasant, threatening and even tangible attack on the Palestinian population. In such cases, they’re convicted in Israeli courts.
We saw pictures of what the Palestinian people queuing for hours to get through one of the many checkpoints that exist in the Israeli-built barrier. He talks at length about queuing and we saw pictures of Israeli strawberries being picked by a Palestinian woman. But not one word about why the barrier exists, or why the Israelis have set up these checkpoints. It does not mention a word that suicide bombings have largely ceased in Israel due to the barrier.
After the lecture is given the opportunity to ask questions and that is when a male audience exclaims: “Why did not someone tell us sooner? We should cut the throats of all the Jews! ”
A great responsibility lies with the presenter and SKR when so totally one-sided depicts the situation in a small village with 100 inhabitants in the West Bank. SKR Swedish calls Christians to be present at various locations in the West Bank to prevent the Israelis, mainly settlers, shouldn’t be able to harass the Palestinian villagers. The companions are in the area in three months and many (in this case, it was so) have never been to either Israel or Palestine in the past and no information about the town of Sderot, where shells from Gaza, sometimes raining down, we were not.
Sweden’s Christian unity, those who stand behind the SKR, will assume a huge responsibility when it encourages and invites individuals to travel around and give lectures about their experiences. For it is precisely their own experiences to talk about and the lack of analysis or to highlight the problem from different directions are complete. This leads to the listeners get a one-sided picture. In this case, it led to an outbreak that could lead to a notification of incitement to racial hatred.
Taking a few words to summarize the lecture, it is so that the Palestinians are kind, cute and sweet, while the Israelis are brutal, cruel and ruthless other than peace activists who supports the Palestinians.
Perhaps it is the image we have, and it was further reinforced when the speaker in response to the outburst “We should cut the throats of all the Jews!” Answered by saying “You have to distinguish between Jews and Israelis.”

NOTE: Here’s another example of Swedish pro-Palestinian activists, (ISM) who have no problem whatsoever hanging around with terrorists. 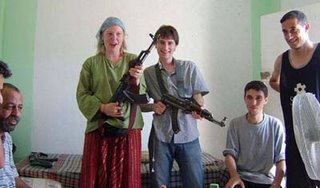