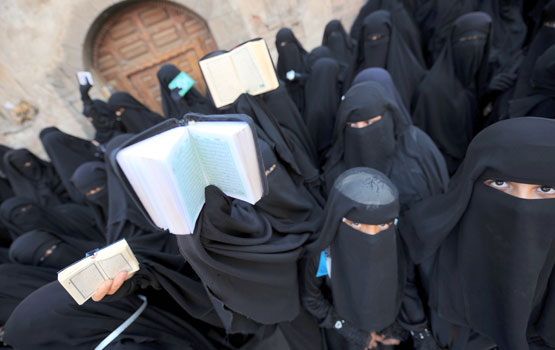 The Bagged Women of Yemen Speak:
What was good for our prophet is good enough for us
A case of community Stockholm Syndrome in these abused Yemeni females, doomed to a life in the cult of Mo. They know of no other way than the brunt of the hand or fist, and submissiveness of the womenfolk, and it’s all legit, and sanctioned by courts built upon the Koran and sharia. Yes there are brave (real) human rights activists who demand change in the law, but the threats of violence and intimidation by the Islamic fundamentalists always presents a formidable foe. KGS
H/T Kumitonttu
Yemen women oppose proposed child marriage ban

Thousands of Yemeni women, their faces covered in religious veils, demonstrated outside the parliament today to oppose proposed legislation banning the marriage of girls under 17.
The protesters held up banners proclaiming “don’t ban what Allah made permissible,” or “stop violating Islamic sharia law in the name of rights and freedoms,” an AFP correspondent said.
Answering calls by Muslim clerics who oppose the proposal on grounds it goes against Islamic sharia law, the protesters arrived in organised buses.
Proposed amendments to the civil status law stalled in parliament last August after severe opposition to a government proposal that would ban girls females 17 and males under 18 from marrying.
Child marriages are common in impoverished Yemen, especially in rural areas, where girls as young as eight are known to have been married off by desperately poor parents.
Last year a child marriage case in Yemen made international headlines after a 12-year-old girl died in childbirth, together with the baby.
“Where will this… new law take us?” asked Umm Abdulaziz, a protester clad in black from head-to-toe.
[TT: Into the 21st century]
“Most rights groups have women who are over 40 and still not married,” she added in an apparent taunt at unmarried activists in Yemen, whose largely traditional tribal society looks down on single women past a certain age.
“There is a significant spinstership among female students in Yemen universities,” she added.
A handful of women’s rights activists outside the parliament were seen leaving after being outnumbered by the demonstrators.
“It is unreasonable to marry our daughters at the age of eight or nine. This is a serious problem,” said Houriya Mashhour, deputy director of Yemen’s Women National Committee.
A delegation from the protesters met MP Sheikh Humaid al-Ahmar, the deputy speaker of the parliament, along with several Islamist MPs from Al-Islah, a powerful opposition party leading the campaign against the proposed amendments.
“We consider those who call for limiting marriage age by law as enemies of Allah, his prophet and us,” said one of the women delegates.
Rights activist Ahmed al-Qorashi warned last September that a huge proportion of girls in rural Yemen are married off under age 15, mainly due to financial reasons.
He was speaking after Fawziya Abdullah Youssef, a 12-year-old Yemeni girl who was forced into marriage, died during a difficult delivery together with the baby.

In 2008, a Yemeni court granted a divorce to an eight-year-old girl whose unemployed father forced her into an arranged marriage with a man 20 years her senior.