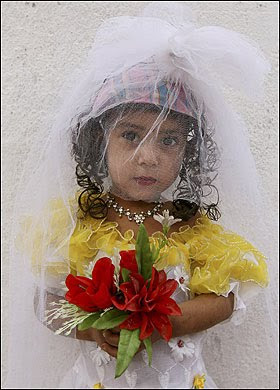 No matter how many times you here of such a thing, your blood starts to boil. Thanks to the ideology of the false prophet of allah’s Islam, the raping of little girls is sanctioned by Islamic clerics. You know, imitating that great character of the prophet of Islam is one of life’s chief aims, no matter if it means the rape and plunder of little girls. KGS
H/T: TROP

NEW YORK (al-Reuters) – In a harrowing memoir she has yet to read herself, Nujood Ali tells how at age 9 she was forced to marry a man three times her age, raped and beaten, then made Yemeni history by getting a divorce.

“I am Nujood, Age 10 and Divorced,” was released in English in the United States this month and is due to be published shortly in Arabic, allowing the now 12-year-old schoolgirl to finally read the story that drew international attention.

“I do not know what is in it, except what I have been told about. I am still waiting to read it in my own language,” she said via e-mail through her Yemeni translator and filmmaker Khadija Al-Salami. “But I guess it is important to have my story come out to the rest of the world.”

Publishers have plans to release the book, as told to and written by French journalist Delphine Minoui, in 19 languages after it first appeared in France last year.

Two years ago Ali was thrust into the spotlight after her ordeal as a child bride was first reported in the Yemen Times. She traveled to New York as Glamour magazine’s woman of the year, becoming an international symbol for women’s rights.

The book reveals how when she was around 9, her impoverished father — who had more than a dozen children — agreed for her to marry an older man.

She says he took her out of school, drove her with his family to a village, and raped her the first night of their marriage.

“No matter how I screamed, no one came to help me. It hurt awfully, and I was all alone to face the pain,” she recalls in the memoir.