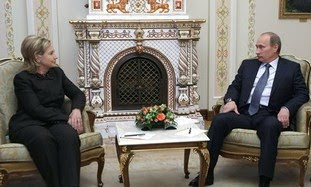 Putin: Your administration is as laughable
as your pantsuit Hillary.
It’s feeding frenzy time in the world of diplomacy vis-a-vis the amateurish Obama administration in Washington, blood is in the water and the sharks are circling. If even the low life Syrian regime thinks it can take the US Democrats as simpletons, why not Russia’s Putin? KGS

Russian Prime Minister Vladimir Putin said Thursday that Iran’s new Russian-built nuclear power plant will begin operating this summer, even as the United States called for Russia to delay the startup.
In apparent response, US Secretary of State Hillary Rodham Clinton – in Moscow on an official trip – urged Russia not to start up the plant until Teheran proves that it’s not developing atomic weapons.
But Russian Foreign Minister Sergey Lavrov, at a joint news conference with Clinton, immediately stepped in to say that Russia would put the reactor online.

Russia to back ‘smart’ Iran sanctions

Russian Prime Minister Vladimir Putin told US Secretary of State Hillary Rodham Clinton on Friday that Russia may accede to a sanctions resolution on Iran, RIA state news agency reported, adding Putin went on to caution Clinton that sanctions “do not always help to resolve such an issue and that sometimes they can have a counterproductive impact”
Putin “gave his appraisal of the situation in Iran and underlined that such a situation (involving Russian support of a sanctions resolution) was possible,” RIA quoted Putin’s deputy chief of staff Yuri Ushakov as saying.
In their first meeting since Clinton became secretary of state, Putin – considered by many to be the real power in Russia – greeted the Secretary of State with a volley of complaints about trade and Russia’s difficulties in joining the World Trade Organization.
Also on Friday, Clinton stated in an interview with Bloomberg TV in Moscow, the US and Russia were close to signing a new nuclear arms-control agreement. “We hope to have a signing ceremony between President Medvedev and President Obama in early April,” she said.