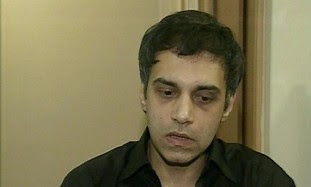 Caspian Makan: One day we will be free
You see folks, many of those Iranians protesting in the streets of Iran against the Iranian regime, though belonging to the “Green Movement”, were not alligned with the corrupt mullah opposition who are just as bad as the thugs currently in power, but actual freedom fighters who have had it up to their eyeballs with the Islamic state.
But Caspian better hope that Team Obama is defeated this November in the mid-term elections and again in 2012, if he wants any kind of actual help from Washington, for this present administration has thrown the Iranian people to the dogs.
Caspian, the Tundra Tabloids sincerely hopes that your people will one day indeed, be truly free. You’re a friend of Israel, and many Iranians are, the Tundra Tabloids has personally met many of them here in Finland and in Sweden, the Israelis and Jews everywhere appreciate that fact, and join the TT in wishing you and your people the very best.
Unlike the hack US president and his miserable administration that currently holds power in Washington, who wants to build bridges with Ahmadinejad’s regime. What Obamanation doesn’t realize (he can’t see through the clouded haze of his meglomania), is that the Iranian street despises him for his overtures to the Mullah run regime and his noticeable lack of support for the Iranian protestors. KGS

Neda’s fiance: Iran will be free

The fiancé of Neda Agha-Soltan, who was killed during protests in Teheran following the Iranian elections last year, visited Israel as guest of Channel 2, the station reported Friday evening.
Soltan’s death was caught on a video widely disseminated through the Internet and on news outlets, and she has become a symbol of the Iranian opposition.
Caspian Makan was tortured by the Iranian government and escaped to Canada following Neda’s death.
He had said his dream was to come to Israel.
Now, that Makan landed here, he will have the honor of meeting President Shimon Peres.
“I have come here out of the brotherhood of nations,” Makan told Channel 2.
“Neda was just a voice that yearned for freedom. In the name of this cause she joined the protesters and this is why she was murdered by agents of the regime,” Makan said.
“I was arrested six days after Neda’s murder, because I exposed crimes committed by the regime,” a weary-looking Makan said.
In trembling voice, Makan said there was hope for change in Iran. “The Iranian people is aware of the rights its being denied. Today the Iranian people is steadfast to achieve victory and to overthrow the current regime.”
Makan said he hoped for an Iran “where no man comes against his fellow man, with no more executions, no more war, no more murder.”
Asked what he would tell Neda if he knew she could hear him, Makan said “I will continue along her path. Her path was the path of freedom, not just for Iranians but for the whole world.
“Love for mankind was part of [Neda’s] being,” Makan said.