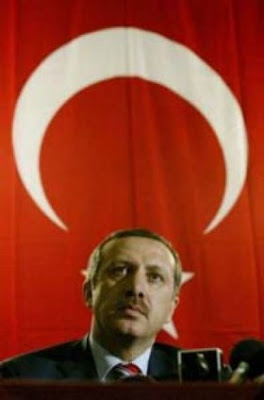 Erdogan: To ask a Muslim living in Europe
to become more European, is to be Islamophobic
No you moron, it’s called intergration into a secular society as an equal member, which means not trying to subvert it though an Islamic agenda of “divide then eventually rule”. Exuse us if we choose not to be colonized with mobs of your fundamentalist Islamic horde, and thankfully there are at least some Turks in Germany who choose the more secular life and reject your hegemony.
How many of these Turks actually do reject the Islamification of Germany is anyone’s guess, the Tundra Tabloids trusts polls as far as it can throw them. This is another stark indicator of Turkey’s plunge into the pool of fundamental/tradtional Islam, and it wants all of their fellow ex-pat Turks living in Europe to swim along. Well the Tundra Tabloids blows the whistle on that scheme, and calls for a serious draining of the pool, or should I say swamp. KGS

The Turkish government has reportedly angered Turkish-German politicians by inviting them to an Istanbul conference and then urging them to resist political and social integration in their adopted homeland.
At the meeting last month, Turkish Prime Minister Recep Tayyip Erdogan urged Turks living in foreign countries to take out citizenship of the new homelands -not to integrate, but rather to become more politically active, according to the website of news magazine Der Spiegel.
Ali Ertan Toprak, deputy chairman of the Alevi community in Germany, told the
magazine government representatives had said: “We have to inject European culture with Turkish.”
[TT: That’s the aim, just switch Turkish for Islamic, that’s what they want.]
Erdogan told the meeting countries that did not allow dual citizenship violated basic rights and also likened Islamophobia to anti-Semitism.
[TT: Absolute nonsense]
Participants told Spiegel that Erdogan repeated elements of his widely criticised speech in Cologne in 2008 in which he said: “Assimilation is a crime against humanity.”
[TT: As opposed to Western politicians, the Musulmans mean what they say]
The invitation to politicians and religious leaders of Turkish descent included lunch in a five-star hotel in Istanbul and offered to cover their travel costs.
The title of the meeting was: “Wherever one of our countrymen is, we are there
too.”
[TT: You bet]
About 1,500 Turks from several European countries attended, including a Belgian MP and representatives of companies and NGOs.
The meeting was organised by Erdogan’s reigning Justice and Development Party (AKP), which has conservative-religious leanings and has been criticised for pulling the country away from its secular tradition.
[TT: Criticized, but not deterred]
Faruk Celik, a minister in Erdogan’s cabinet, described German politicians as “my honourable parliamentarians” and described Erdogan as “our Prime Minister.”
German politicians and religious representatives of Turkish descent were shocked by the brazen political lobbying and were sharply critical of Ankara.
“It was an absolutely clear lobbying event by the Turkish government,” said Ali Ertan Toprak. He said he was appalled by how often the Turkish government had said Turkish-Germans should represent the interests of Turkey.
[TT: Don’t be shocked, just act against them, join the Counterjihad and reject the Islamification project of Europe by the OIC,…which is headed by a bigoted and antisemitic Turk]
“If opponents of (Turkey’s) EU entry from the (European) Union had been there, they would have got a whole lot of material for their argument,” Toprak said.
[TT: The Musluman Turks are so arrogant, that they don’t see Toprak’s point. Great, nothing better than more of the same kind of talk.]
Canan Bayram, a Turkish-born Greens member of the Berlin city parliament, said she had travelled to the conference as the integration spokeswoman for her party but had insisted on paying for herself.
“It was important for me to make clear that as a German MP I was not financed by the Turkish government,” she said.
Former Social Democrats member of the European parliament and businessman Vural Öger said: “The Turkish government should worry about the interests of Turks in Turkey rather than trying to use Germans of Turkish descent as their messengers.”