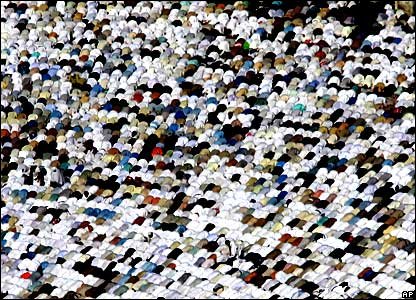 Remember how leaders in the cult of allah’s Islam are quick to swear that they are a part of the three Abrahamic faiths, and that only through interfaith activities can the “three great monotheistic faiths” to come to some kind of understanding and co-existence? Not so fast.

The Tundra Tabloids has been long on record saying that that isn’t so, Islam has nothing to do with Judaism or Christianity, nor has it brought anything new to the world, being nothing more than a ripoff from both faiths, coupled with a highly toxic mix of vitriolic hate speech and anti-modern safe-guards in its ideology, that make it encapable of reforming itself. Those that try to reform it, end up on the short end of a fatwa and are soon intimidated to recant, or are slaughtered for the sake of allah’s ummah.
Here’s another stark reminder of just how “interfaith friendly” the Mohammedan is towards the Jew and Christian. Thanks to Gaia for bringing this to the Tundra Tabloids’ attention. Quite revealing actually. After reading it, ask yourself, “interfaith” anyone? KGS

Hundreds of Muslim students have been holding prayers outside City University London for a month in protest at the closure of a prayer room used exclusively by them.
The students declare that “multi-faith” alternatives are unacceptable because “a vast number of Muslim scholars throughout history believe it is impermissible for Muslims to offer prayers in a place where [a god] other than our Lord, Allah, is worshipped”.
What was that about the “three Abrahamic faiths,” and “we all pray to the same God”? Now we learn that Muslim scholars throughout history believe that the Islamic Allah is NOT the same god as the Christian God or the Jewish YHVH? Goodness me.
In an open letter, the protesters also point out that the multi-faith room can accommodate only 40 people, which is too small for the number of Muslims who need to pray at least three times per day.
All-male groups have been praying on the pavement outside City since 15 February, with more than 200 reportedly turning up for Friday prayers in Northampton Square.