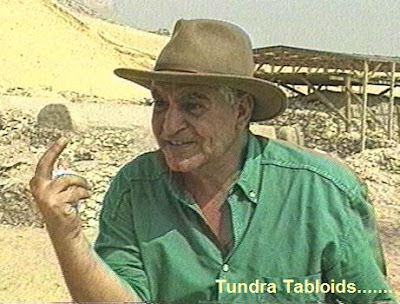 Zahi Hawass: It’s da Joooos’ own fault
Enjoying life, especially if you’re a Jew isn’t allowed in Egypt. Zahi Hawass is an ass and an antisemite, and someone the Tundra Tabloids changes the channel on whenever his mug comes to the TV screen. Oh, and Obama didn’t have any problem taking a tour with the famous antisemite either.

But then again, Obama sat in a pseudo church for twenty years listening to Marxist sermons laced with anti-Israel diatribes and calls for Black separatism. KGS

CAIRO (AFP) – Egypt cancelled the formal opening Sunday of a renovated 19th-century synagogue in Cairo to protest what antiquities chief Zahi Hawass said were “provocative” Jewish and Israeli action.
Hawass and Culture Minister Faruq Hosni were due to attend the event, a week after 150 people, including rabbis and the US and Israeli ambassadors, attended the rededication of the Maimonides synagogue.
Hawass, citing press reports, said in a statement that the cancellation comes after “provocative” acts during the March 7 ceremony in Cairo’s ancient Jewish quarters by the Jewish community.
He referred to “dancing and drinking alcohol in the synagogue, as reported by several newspapers” and said these acts “were seen to provoke the feelings of millions of Muslims in Egypt and across the world.”
The decision was also taken at “a time when Muslim holy sites in occupied Palestine face assaults from Israeli occupation forces and settlers,” Hawass said.