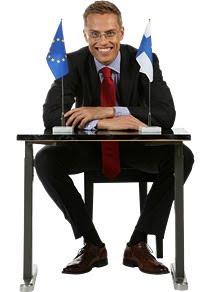 Alexander Stubb:
Golly gee, I really do believe that,
SO THEREFOR IT’S GOTTA BE TRUE!
The more you find out about Alexander Stubb, the less there is to like. More than anything else, the man is a “team player”, meaning that he’s a dutiful EU apparatchik who would never dare depart from official EU policy no matter how much it contradicted his own values and common sense. Simply put, the man’s a drone, a lap dog, a cheerleader for EU policy, not because it might be a good policy, but because it’s “jointly agreed upon” EU policy, period.
The blogger Daniel over at the Swedish language Israelnyheter blog, writes an excellent piece on the Finnish FM’s absurd notion that the EU is a neutral party to the Arabs’ conflict with Israel, as well as about the current flap over building homes in Ramat Shlomo. The TT reprints his entire post here. KGS

The EU is a neutral arbitrator?

In an article in Saturday’s OT (a Finnish Swedish language paper) dealing with the situation in Israel, readers get unclear information. First, it is claimed that Israel is planning new controversial settlements and than it says that Israel is building new apartments in Jerusalem. The truth is that the new housing is planned in the Orthodox Jewish district of Ramat Shlomo in the northeastern part of Israel’s capital Jerusalem. The area currently has about 16,000 inhabitants. There is therefore no question of a new settlement and there is no real reason for the condemnation of the world against the building plans.
Palestinians, who stubbornly refused to negotiate with Israel for over a year, take the construction plans as the reason for withdrawing from the currently planned indirect negotiations, but there is no logic in this, because Israel never promised to refrain from building in Jerusalem.
U.S. and EU condemnation of the building plans while refraining from making any criticism of the Palestinians says something about their attitude towards Israel.
It seems that EU politicians would have created their own fantasy world in the Middle East. EU foreign minister Ashton said on Saturday that the EU is prepared to use its trade relations in order to force Israel into negotiations with the Palestinians.
Carl Bildt of Sweden said on the occasion of the building plans in Jerusalem that there are no guarantees that Israel seeks peace and Finland’s Stubb said on Sunday that the EU could act as a neutral judge in the Middle East since Europe has no historical burden in contrast to the U.S..
In reality, Israel has always been willing to begin direct negotiations, there is no need for pressure. It is the Palestinians who have refused.
When it comes to peace like we know that Israel made peace with both Egypt and Jordan. Israel displaced the Jews from Gaza a few years ago and issued a building freeze on West Bank last fall to possibly obtain peace with the Palestinians. Israel want to have peace, but perhaps not on the EU and Bildt’s conditions.
EU without historical load? Almost entire Middle East was occupied by European countries for 80 years ago.
The EU is neutral arbitrator? The EU criticizes and condemns Israel for building housing for their citizens. At the same time they are silent when the Palestinians elevates terrorists to that of heroes, the more Jews killed the greater the hero. Last week, the 32-th anniversary of a terrorist attack that killed 37 Israeli civilians Palestinians planned to inaugurate a square in honor of Dalal Mughrabi who carried out the terrorist attack.

The opening ceremony was canceled at the last minute for “technical reasons” but the Palestinian leadership of President Abbas and down has defended and supported the project despite Israeli protests.
Israel wants to build housing for its citizens, that is no obstacle to peace and no reason for condemnation, however, the Palestinian Authority’s elevation of terrorists into role models for young people is an effective way to prevent a peaceful development and should be strongly condemned.