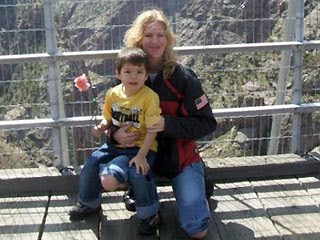 He was being turned into a baby bomber.
The story gets more weird and predictable at the same time. The Tundra Tabloids called it right, the mother was going to use her son in some way to get close enough to the Swedish artist. Lars Vilks, who drew Mohamed as a roundabout dog, to kill him. Somehow all these converts seem to go for the “distorted” version of Islam.

The 6-year-old son of a Colorado nursing student who ran off to Europe to join a terrorist murder cell was brainwashed into a hate-filled Islamic fundamentalist zombie, his family said Saturday, The New York Post reported.
“He said that Christians will burn in hellfire,” the child’s grandmother, Christine Mott, told The Post. “That’s what they are teaching this baby.”
The boy’s mom, Jamie Paulin-Ramirez, 31, converted to Islam over the last year. Her family said she struck up an Internet friendship with another Colorado radical, Najibullah Zazi, an Al Qaeda associate who pleaded guilty last month in a plot to set off bombs in the New York subway system.
Her conversion was so complete, Paulin-Ramirez changed her son’s name from Christian to the Islamic name Walid after enrolling him in a fire-breathing Muslim school in Ireland.
The terror mom’s stepfather, George Mott, said he talked by phone once with the boy at the school and the boy said: “We are building pipes [pipe bombs], like the Fourth of July!”
[…]
George Mott, is himself a Muslim convert who speaks Arabic. He said that once as he talked to the boy on the phone, he could hear a Jihadi recruitment tape playing in the background talking of death to Zionists and America.
Before the boy left, he was like any other 6-year-old, George Mott said. He was into normal things like cartoons, cars and dinosaurs. “I figured him to be a paleontologist,” he said.
“He has not been in school since they left there,” George said. “He’s in an Islamic school. They’re teaching him hate.”
More here.