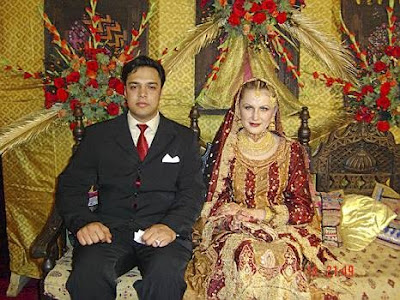 Osama and Maryam Mirja Jusufzai’s
wedding in Pakistan in 2004.

File this one under, “I thought it to have been a good idea at the time”.

Finnish convert to Islam moves to Pakistan and now faces the possibility of being blown up, or beheaded by the Taleban. The story comes by way of the Finnish capital’s bird cage paper, the Hell-Singing Sanomat. KGS
NOTE: She better hope that she doesn’t become a punching bag for her husband, or suspected of being unfaithful, because there’s no recourse for her like there is in Finland. Wetern women who marry Muslims are literally placing their own lives into the hands of their husbands and their relatives.

PESHAWAR. Maryam Mirja Jusufzai, 30, born in Rauma Finland, became a Muslim a few years ago and followed her husband, Osama Jusufzai to Pakistan.
Jusufzai’s family life, however, also differs from that of the ordinary everyday life of a Pakistani family. Osama’s father, Mahmud Shah is one of Pakistan’s best-known critics of the extremist Islamic Taliban.
Former Brigadier General and former Security Minister of the tribal region, Shah in October rose to number one on the Taliban’s death list. Since Maryam, Osama, and their two year old son Armaan Osama live in the same house with the parents, the whole family is in danger.
The Taliban threat is seen and feelt on the streets of Peshawar. Outside of Mahmud Shah’s house and throughout the neighborhood armed guards are on patrol. Ever since the army launched attacks against the Taliban in Peshawar and around Swatissa Waziristan, Taliban suicide bombers have been trying to avenge their losses.
Also kept in Maryam’s house are weapons: pistols and Kalashnikov assault rifles,. The rounds are packed in bags.
Last June, the Taliban blew up a huge car bomb two kilometers away from the family home, at the hotel, where Maryam and Amin Osama’s wedding reception took place. Large parts of the Pearl Continental hotel collapsed. It killed 11 civilians and left 50 wounded.
Nowadays, Maryam check for text messages after each of the bombing that her husband and in-laws are still alive.
“Quite a difference compared to a peaceful Finland. In Finland, once I read the newspaper about a car accident. No one was killed and nobody injured. Still, it reached the headlines of the newspaper,” Osama says.
Maryam and Osama became acquainted, when Osama came to Finland to study. Originally, neither of them would have preferred to fall in love with someone with very different cultural traditions.
“I thought it would be easier to marry a Muslim from Pakistan”, Osama admits.
“I too did not originally plan to marry a foreigner, let alone a Pakistani Muslim,” Maryam recalls.
The couple moved to Pakistan when Osaman father became ill.
“Sometimes I feel that it would be better to leave Pakistan. It’s too dangerous,” says Osama. “But believe it or not, Maryam wants to stay.”