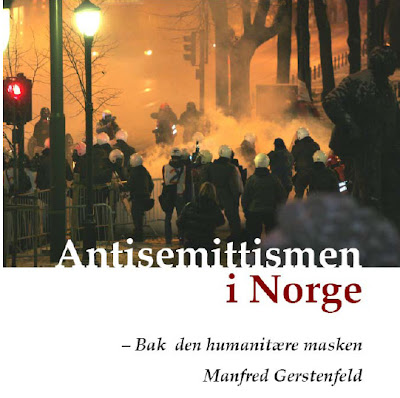 Norway’s NRK reports (13.03.2010) of the antisemitism directed towards Jews by the Muslim community in both Sweden and in Norway. The shocking report first focuses on Jews in Malmö Sweden, who are leaving for elsewhere because the situation there -due in part to the mayor, Ilmar Reepalu’s lack of interest in tackling the problem of antisemitism- has become intolerable.

The report then takes notice of the situation in Norwegian schools, in which many students who come from Muslim backgrounds are openly antisemitic, and even going so far as to approvingly speak of the Koran authorizing the murder of Jews. Folks, this is real life, not fantasy. While the OIC is pushing its agenda of securing the Islamic community and the ideology of Islam from any criticism whatsoever, their very own members are engaged in daily assaults against the smaller Jewish community.
The governments in both Sweden and in Norway appear to be entirely incapable of doing anything to stop the trend, and have apparently resigned themselves to live with the fact that their own Jewish communities will some day soon become extinct. Thankfully the situation in Finland has not reached that level of antisemtism that Jews are heading for elsewhere, and that is owed to the fact that Finland has only 30 000 Muslims, give or take a few thousand. If we enlargen that number to any greater extent, the same will happen here as well. The following is a loose translation of the original article in Norwegian.
H/T Baron Bodissey

Migration growing from Jew-hatred in Sweden

Of Malmo’s 260,000 population 60,000 are Muslims. Some of the Muslims carrying on with Jew-hatred that makes life difficult for some of the city’s 700 Jews.
Harassment and threats makes many Jews to now live in insecurity.
A Jewish family man thinks much it started with a demonstration on the Gaza war a year ago.
– The demonstration degenerated completely, through which the relatively small Jewish group was attacked and had to be evacuated by the police. It was something that none of us had ever dreamed that we would experience in Malmö’s streets, says the family father to NRK.
Moving to Israel
He dares not expose their children to what he believes is a growing Jew-hatred in Malmö. About every month one family leaves Sweden for good and moves to Israel.
His family fled the pogroms in Eastern Europe to safety in Sweden in 1890. Now history repeats itself.
The Jewish synagogue has police surveillance. The synagogue has been torched. Hate crimes with anti-Semitic messages has doubled in the past year.
For security reasons, he dares not to go with skull cap to the Malmö center.
– What do you think that you, in your own town, where you were born and raised, you can not be clear on who you are?
– It is completely unacceptable. It is a complete defeat for the community…….
Increases in Norway
The synagogue in Oslo has as many members as the synagogue in Malmö, 700. NRK launched a year ago with the work to reveal how widespread anti-Semitic attitudes – Jew-hatred – were among Norwegian Muslims. Jew-hatred means hatred affecting Jews because they are Jews.
NRK has talked with many Jewish parents who talk about Jew-hatred toward their own children. No one dares to come forward with names and pictures and they are therefore anonymous.
A Jewish father tells about when his son was on his way home from school, and was stopped by a gang of older boys:
– They asked: “Are not you a Jew?”, When they receive the affirmative answer, they said that they will drag him into the woods and hang him. The boy was afraid. Frykten tok ham. Fear took him. They had to move to another district, but also where they moved there was Jewish vilification. – Too bad no Hezbollah could kill you too, and similar remarks. The father is afraid his son has been hurt for life.
Students admire Hitler
NRK has talked to teachers at schools with many Muslim students. None of the teachers dare to let themselves be interviewed. They are afraid of reprisals from pupils, and are therefore anonymous:
Teacher 1, female:
“It is the notorious publically exposing of Jews. Everything from jokes to revealing death threats” It’s in the Koran that you must kill the Jews, it’s right for all Muslims to hate Jews. Jews should be killed if they come here to this school“, is the students who said. To praise Hitler for what he did with the Jews is another classic case of students at my school. The worst thing about this is that Jew-hatred has been completely legitimized in large groups of pupils with a Muslim background. ”
Teacher 2, male:
“I see a Jew hatred, especially in social studies lessons. Students say the Jews control everything, the entire West is controlled by Jews. Several also said that they admire Hitler because he killed Jews. “The attack on the Twin Towers in New York on 11 September 2001, there were Jews who were behind it.” In my class if someone says they support terrorism, there are some who protest. But if someone expresses Jew-hatred, no one protests. ”
Teacher 3, female:
“Several students sneer when I talk about the Holocaust. A boy stood up and commanded me to stop talking about Jews and the Holocaust. Most of these kids are born and raised in Norway. I find it shocking that it’s possible to grow up in Norway with such attitudes.”
Teacher 4 male.
“ Fucking Jew “is a heavily used term of abuse during school hours. Had I been a Jew, I would have felt it very offensive. These statements are a big problem.”
The Teachers NRK have talked with have the impression that the pupils in Norwegian schools get many of their positions via radio and television broadcasts and via satellite.
(NRK)

Much more here as well.