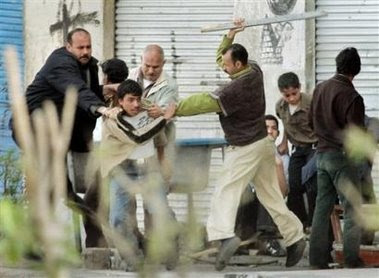 Prior incident of a Copt being beaten
by a Muslim mob in Egypt
Islam busy keeping the dhimmi in their place. Periodic violence against non-Muslim minorities by the Islamic community, is a means by which they keep the “infidel” intimidated and feeling subdued as commanded by their warlord leader, Mohamed. KGS
Koran: 9 verse 29: “Fight those who believe not in Allah nor the Last Day, nor hold that forbidden which hath been forbidden by Allah and His Messenger, nor acknowledge the Religion of Truth, from among the People of the Book, until they pay the Jizya with willing submission, and feel themselves subdued.”

Faithful were gathered in prayer when attack occurred. There were four priests, one deacon and 400 parishioners in the building, women and children also targeted. Fundamentalists fury, egged on by the imam, unleashed by the rumour that the Christians are building a new church. In reality it is a hospice.
Cairo (AsiaNews / Agencies) – The toll from an attack on the Coptic Christian community that took place yesterday in the north-western province of Mersa Matrouh, Egypt is 25 wounded, including women and children. A crowd of around 3 thousand Muslims attacked the faithful gathered in prayer in a building adjoining the local church. The fundamentalists fury, encouraged by the imam, was sparked by the rumour that the Christians have begun to build a new place of worship.
Around 5 o’clock yesterday afternoon, the Muslims – a group of Bedouins and Salafi fanatics – started throwing stones at a construction site, which they believe in reality will be a new church. Local witnesses reported that security forces present were not sufficient to contain the attack. The police fired tear gas and arrested a dozen people, including Muslims and Christians. Only this morning, reinforcements arrived from Alexandria, thanks to which the Coptic faithful trapped inside the building could return to their homes.
At the moment of the attack the Christian prayer house contained four priests, one deacon and about 400 parishioners. Christians say that the building under construction, in fact, is a nursing home and said they were “terrified” by the latest attack. The local imam Shaikh Khamees intervention during Friday prayers has helped to foment the anger of Muslims. He emphasized the duty to fight against the “enemies” of Islam and stressed that “we do not tolerate the Christian presence in our area.”