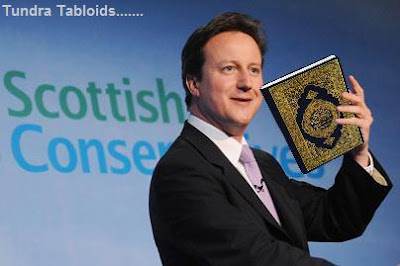 Dhimmi David Cameron:
I’ve seen the light!
The Tories show once again their political pedigree is more Leftist orientated than most would dare admit. Islamophobia is a means by which fundamentalist Muslims and their organizations seek to intimidate majority non-Muslims in the tolerant West into submission to Islamic mores and agenda. There is nothing to the charge of Islamophobia, and the Muslims know it, the Organization of the Islamic Conference knows it, and use it with great skill on drones like David Cameron in the UK, and with sad ignorant-about-Islam pundits like Bill Kristol and Charles Krauthammer.

From the Vlad Tepes blog, A Millar:

The British Conservative party has become increasingly concerned about “Islamophobia.” Party leader David Cameron has even said that he wants to see “British Muslim all across government, in positions of leadership and authority.” (See my article here.) Conservative MP Paul Goodman is now calling for a parliamentary inquiry into “Islamophobia.” He cites neo-Nazis, UKIP, and the EDL as proof of “Islamophobia,” but suggests that “If the Jamaat e Islami [which has alleged terrorist links] or the Muslim Brotherhood [which gave birth to Hamas and al-Qaeada among others] wanted to make representations [at such an inquiry], they should be allowed to do so.” Why?
From Conservative Home. By Paul Goodman MP.
I have in front of me as I write a meticulously-compiled document from the Community Security Trust – its “Antisemitic Incidents Report 2009”.
The report details such incidents, breaks them down into different types, and reports trends within those categories. There’s an active All-Party Group on Anti-Semitism in Parliament. The Government has an inter-departmental working group to combat the prejudice. Ministers can be held to account in relation to it during an annual Parliamentary debate.
There are no comparable figures for incidents relating to Islamophobia or the hatred of Muslims. (The two are not quite the same – a point that I’ll return to later.) Perhaps this is because there is no Muslim equivalent of the Community Security Trust to collect and order data. Certainly, there’s no All-Party Group on Islamophobia and anti-Muslim prejudice to date, no similar Government working group, no annual Parliamentary debate.
To suggest that anti-semitism and Islamophobia/hatred of Muslims are equivalent is controversial. There are obvious differences. One is based primarily on race (though containing a religious element); the other is based mainly on religion (though containing a racial element – often a very significant one). Comparing and contrasting can take one round in loops and get one nowhere.
So instead, Islamophobia/hatred of Muslims should be examined in its own terms. Although, as I say, there’s a comparative shortage of data, there seem to be three broad trends.