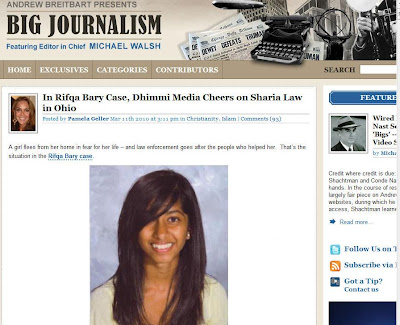 Thanks to Atlas for pursuing this case of apostate from Islam, Rifqa Bary, that most, if not all in the main stream media have either under reported and/or misrepresented. If not for Atlas and Jihad Watch covering this extremely important case in the US, this young woman would have already been dead meat for the dogs. KGS

NOTE: The TT has helped Atlas to some extent in transcribing audio interviews ect,and has been proud to do it, but the big thanks goes to Pamela for digging up all she can on the background to the court hearings etc, that the MSM have messed up completely.

Atlas at Big Journalism: A girl flees from her home in fear for her life – and law enforcement goes after the people who helped her. That’s the situation in the Rifqa Bary case.
The Columbus Dispatch reported this about Rifqa’s friend Brian Williams:

An Ohio minister accused of driving a teenage runaway to a bus station last year has retained a lawyer as police say they’re investigating whether anyone broke the law in helping the Christian convert leave home for Florida.

And why did she flee to Florida? Because, she says, when her devout Muslim father found out she had become a Christian, he said to her, “I will kill you.” And with Islam’s death penalty for apostates, she had to take that seriously. But her father is not in danger of being prosecuted. Brian Williams is.
Law enforcement, in a perverse twist of reality, continues persecuting the Christians in Ohio who helped a teenage apostate escape the death threat (in line with sharia law) made by her family. They are investigating any “criminal wrongdoing with anyone involved in getting her from one location to another.”
How many other runaway cases are pursued in the way? How many other teenage girls in America have this attention paid to them by law enforcement? How many teenage girls who sell their bodies for sex and drugs for an adult pimp are pursued this way? Or their pimps?
Read it all here.