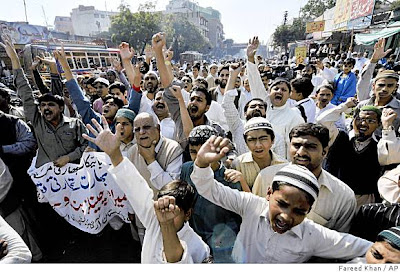 Pakistanis protesting something, but you get the picture
You can bet that the ”immodesty” that they were butchered for, was simply the fact that they were Christians. That these aid workers were involved in the dispensing of aid to the impoverished, needy people of Pakistan is immaterial to the jackals, the main thing for them (not the welfare of Muslims) is that they instilled fear into the Christian community in Pakistan. KGS
H/T TROP
U.S. Charity Is Attacked In Pakistan; 6 Are Killed

PESHAWAR, Pakistan — Six Pakistani employees of the American Christian charity World Vision were killed Wednesday and seven others were wounded in an attack on the aid group’s offices in a remote village in northern Pakistan.
Pakistani authorities said about a dozen masked militants stormed the building at about 9:30 a.m., pulled the staff members out of their offices and herded them into a single room, then started shooting indiscriminately. The attackers set off a bomb as they left, destroying the offices, which are located in North-West Frontier Province, in the village of Oghi, near the disputed region of Kashmir.
A spokesman for World Vision said the attackers robbed the employees and stole computers and telephones from the office before opening fire.
Officials in Pakistan said the assailants were of different ethnicities and spoke a mix of Urdu, Pashto and the Pakistani dialect Hindko as they shouted at the aid workers, telling them that they had been “forewarned to stop spreading immodesty.”
World Vision, based on the West Coast, called the attack the worst single act of violence in its 60-year history and said it was suspending its operations in Pakistan as the authorities there investigated the attack. The group has about 180 employees in the country, the vast majority of them Pakistanis.