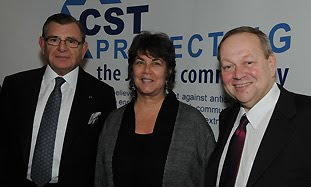 The Tundra Tabloids applauds Hanna Rosenthal’s speech, she captures exactly the heart of the situation, that said, it would have been better nonetheless for the US president to have kept the US chair empty at the UNHRC, and taken to criticizing the UN and its “human rights” council from the sidelines, whenever a good opportunity afforded itself.
The very same could have been done without giving that highly corrupted organization credibility by sitting on its benches, Obama’s approach was the wrong tactic to take, again. There is almost next to nothing that he gets right, he’s been a disaster from the very beginning. KGS

LONDON – The US has decided to reengage with the UN’s Human Rights Council in order to pressure the body to fulfill its mandate, President Barak Obama’s special envoy on anti-Semitism told a London audience.
Hannah Rosenthal, who heads the State Department’s Office to Monitor and Combat Anti-Semitism, was speaking at the Community Security Trust (CST) annual dinner at the Grosvenor House Hotel in central London on Thursday night.
[…]
Rosenthal also spoke about the use of double standards, which she said often implicate Israel and cross into anti-Semitism.
“Anti-Semitism and anti-Israel sentiment often overlap. It is important to note that criticism of Israel is not necessarily anti-Semitic, but it crosses the line when that criticism applies a double standard comparing the current policy of Israel to that of the Nazis, [or] holding all Jews collectively responsible for the actions of the sovereign state of Israel,” she said.
The special envoy was scathing of the UN, questioning its seeming double standards.
“Looking at UN statistics over the last six years, where there have been negative remarks against a country, 170 have been against Israel. Compare that to North Korea that had eight… Israel has had 50 resolutions condemning alleged human rights abuses. Compare that to the Sudan which has had five. Clearly Israel is being held to a different standard and that means it has crossed the line from anti-Israel policy to profound anti-Semitism,” she said to enthusiastic applause.
“We will continue to see that Israel is treated fairly at the UN and in other international bodies,” Rosenthal said.