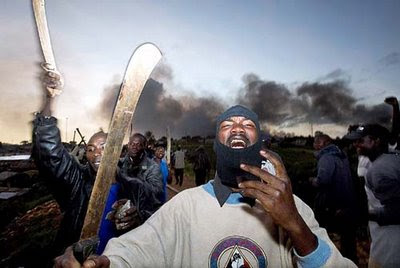 Now bring on the women and the children

Whatever you want to call it, jihad or just old fashioned Muslim butchery, the end result is the same, Islamic encroachment on traditional Animst  or Christian lands is leading to the murders of thousands of non-Muslims in Nigeria. The Sudanese regime allowed the same to continue until the non-Muslims were subdued, and the land confiscated, Nigeria is seeing signs of the same. KGS

Up to 300 feared dead in central Nigeria clashes

Sun, Mar 7 2010JOS, Nigeria (Reuters) – Nigeria’s acting president Sunday ordered the security forces to hunt down those behind clashes involving Muslim herders and Christian villagers in which more than 300 people may have been killed.
The latest unrest in Nigeria’s central Plateau state comes at a difficult time, with acting leader Goodluck Jonathan trying to assert his authority while ailing President Umaru Yar’Adua remains too sick to govern the oil-producing nation.
Villagers in Dogo Nahawa, just south of the state capital Jos, said Hausa-Fulani herders from surrounding hills attacked at about 3 a.m. (10 p.m. EST), shooting into the air before cutting those who came out of their homes with machetes.
A Red Cross official said at least two other nearby communities were also targeted, in an area close to where sectarian clashes killed hundreds of people in January, but that it was too early to give an overall death toll.
A Reuters witness counted more than 120 bodies — most lying in Dogo Nahawa, others taken to mortuaries in Jos — but Plateau State Commissioner for Information Gregory Yenlong said more than 300 people, including women and children, had died.
Jonathan put the security forces on red alert to try to prevent reprisal attacks spreading into neighboring states.
“Reports reaching us indicated marauding bands launched a flurry of attacks on certain communities in the state, causing considerable death and injury,” Jonathan’s office said