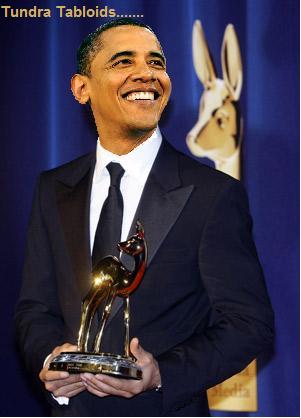 Obambi: It’s why I’m so damn popular
The Tundra Tabloids just recently posted about the US -under both the current and previous administration- had been undermining their own sanction policies against the Iranian regime, by giving grants and benifits to foreign and multinational American companies doing business in Iran. The deals were and still are, totally stupid, irresponsible and self defeating, and prove that sanctions are easily skirted.
Then add to that the mix, the scene of the Syrians heaping loads of humiliation upon the US  in spite of its “well intentioned” overtures, which includes the re-opening of its embassy in Damascus, and sending its envoys to court favorable responses from the Assad regime. Having its face repeatedly slapped by the Syrians seems not to have fazed the Obama administration one bit, in fact, the TT dares to add, they see it as a sign of engagement, that the “dialogue process is moving forward”.

Team Obama has become a laughing stock throughout the Middle East, with the bigger joke being, they believe that it’s actually working. If the stakes weren’t so high the TT would actually find it amusing, but the fact is, the joke will soon be on all of us if they don’t change their foolish tactics, and soon. KGS

Pardon Me, Obama Administration, But Isn’t Your Policy on Fire?

The story of the U.S. engagement with Syria and the sanctions issue regarding Iran’s nuclear program are fascinating. Each day there’s some new development showing how the Obama Administration is acting like a deer standing in the middle of a busy highway admiring the pretty automobile headlights.
Or to put it a different way, it is like watching the monster sneak up behind someone. Even though you know he’s not going to turn around, you can’t help but watch in fascinated horror and yelling out: “Look out!” But he pays no attention.
So I’m not just writing about these two issues in isolation but as very appropriate symbols of everything wrong with Western perceptions of the Middle East (and everywhere else) and the debates over foreign policy (and everything else) nowadays.
On Syria, for the most recent episodes of the story see here and here but, briefly, the Syrian government keeps punching the United States in the face as Washington ignores it.
But now, on March 1, a new record is set. The place: State Department daily press conference; the main character, departmental spokesman Philip J. Crowley. A reporter wants to know how the administration views the fact that the moment the U.S. delegation left after urging Syrian President Bashar al-Asad to move away from Iran and stop supporting Hizballah, Syria’s dictator invited in Iran’s dictator along with Hizballah’s leader and Damascus moved closer to Iran and Hizballah. Indeed, Asad said regarding Hizballah, “To support the resistance is a moral, patriotic and legal duty.”
In other words, the exact opposite of what the United States requested. Is the government annoyed, does it want to express some anger or threat?so
Let’s listen:
MR. CROWLEY: Well, I would point it in a slightly different direction. It came several days after an important visit to Damascus by Under Secretary Bill Burns….We want to see Syria play a more constructive role in the region. We also want – to the extent that it has the ability to talk to Iran directly, we want to make sure that Syria’s communicating to Iran its concerns about its role in the region and the direction, the nature of its nuclear ambitions….”
In other words, I’m going to ignore the fact that the first thing that Asad did after Burns’ visit was a love fest with Iran and Hizballah. But even more amazing, what Crowley said is that the U.S. government thinks Syria, Iran’s partner and ally, is upset that Iran is being aggressive and expansionist. And it actually expects the Syrians to urge Iran not to build nuclear weapons!
One Lebanese observer called this approach, “Living in an alternate universe.”