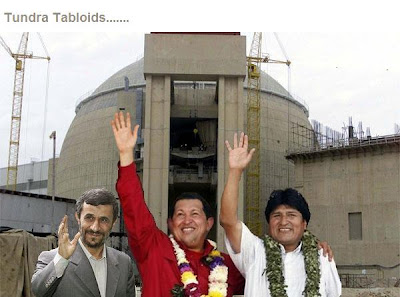 The Three Amigos thanks you Yanks
This is disgusting. Shame on the both the administrations of Bush and Obama for allowing this to happen under their watch. This also shows, if the story holds water, how sanctions, and sanctions against the Iranian regime are a joke. What an embarressment to find this out. KGS
‘US indirectly supports trade with Iran’
The White House indirectly paid $107 billion to companies defying its sanctions against Iran, the New York Times reported Sunday.
According to the report, records show that the US made contract payments and given grants and other benefits over the past decade to foreign and multinational American companies that were doing business in Iran.
The deals continue during the current administration but began already under the previous administration of George W. Bush.
The Times says that some of the companies are embedded in critical aspects of the Iranian economy.
The paper further reports that some of the companies are involved in Iran’s gas and oil sectors and the auto industry, economic fields with close ties to the Iranian Revolutionary Guards.
One of the companies, the Times reports, supplied ship motors to IRISL, the government-owned shipping company which was specifically blacklisted by the .
The vessel Francop, which was ceased by the IDF Navy and contained a massive amount of munition intended to reach Hizbullah, carried containers marked with the IRISL logo.
The New York Times also says that of 74 companies identified as doing business with , 49 have no intention to cease in the near future.