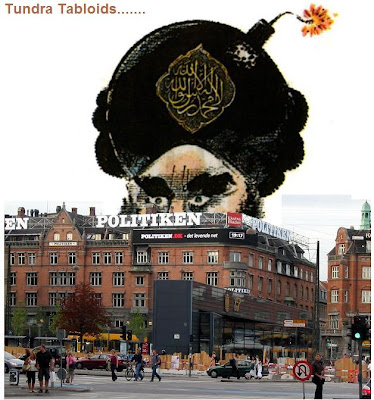 Thanks to Reinhard for the following tip to the open letter signed by a portion of the Poltiken’s staff of journalists, who oppose their employer’s settlement reached with the so called descendants of Mo. KGS

We do not support the newspaper’s Settlement

The undersigned staff of Politiken’s editorial team wishes to register our opposition to the settlement, Politiken’s management has concluded with eight organizations, which allegedly consists of 94,923 descendants of the Prophet Muhammad.
These organizations have announced a lawsuit against politics and several other Danish newspapers because newspapers as part of their news coverage in several cases have reprinted the cartoonist Kurt Westergaard’s cartoon of the Prophet Muhammad.
I apologize for the settlement policy of the violation, many Muslims have felt at the reprinting of the drawing. While the eight organizations for their part, promise not to conduct ‘judicial or administrative actions against policy’.
We would like to emphasize:
1. Politiken har efter vores opfattelse intet at undskylde. Politiken is in our view, nothing to apologize for. Nor that a case which is covered in exactly the same way as we would cover other matters of a news development, has offended a group of people.
Forliget efterlader det indtryk, at vi fortryder vores journalistik, og det er der overhovedet ingen grund til. The settlement gives the impression that we regret our journalism, and there is absolutely no reason.
2. We fear that the settlement, as drafted, will have the effect that the editorial freedom of Politiken’s journalists really are limited. Editor Tøger Seidenfaden’s good enough assurances that the policy has not renounced the right for example to reprint Kurt Westergaard’s drawing, if in the future from an editorial assessment is deemed necessary. This right is not clear from the text of the settlement – which would have been desirable in view of the whole nature of the case.
3. The settlement leaves the unfortunate impression that the policy apologize – not on their own initiative and as a result of a self-reflection, but because the newspaper is under pressure from Muslim organizations. In addition commits the counterparty in the settlement not to give anything in return – for example, an explicit recognition of media freedom. Counterparty undertakes only to drop a legal action that we believe is unfair. By extension, it is our opinion that in this case is so important principles of freedom of expression at stake, that testing in a courtroom would have been preferable for this so-called conciliation.
4. As citizens in a democratic society, we are obviously in favor of dialogue and peaceful coexistence. But we also have an urgent need to stress that we as journalists are not part of the diplomatic corps. Journalists’ role in a democracy is not primarily to contribute to peace and reconciliation, but a) to describe reality as accurately as possible and b) to promote public debate.
We recognize that the media also have an obligation to act responsibly, which is very well regulated by existing legislation. But modern newspapers containing articles every day, which inevitably offensive to individuals or groups. Media in a free, democratic society must continuously dare to challenge attitudes across all political and religious divides.
Speech is written with Anders Hjort, Anders Legarth Schmidt, Bo Sondergaard, Carsten Andersen, Carsten Godtfredsen, Christian Hüttemeier Kjeldsen, Christina Zemanova Ekelund, Claus Norregaard, Erik Jensen, Esben Kjær Flemming Ytzen Hans Davidsen-Nielsen, Henrik Kaufholz, Jakob Sorgenfri Kjaer, Jens Lenler, Kjeld Hybel, Kaare Skovmand, beech Lars Overgaard, Lotte Thorsen, Martin Kaae, Martin Aagaard, Michael Bech Michael Lund, Nikolaj Lauta, Nila Nordberg Hein Skou, Nils Thorsen, Ove Kusnitzoff Ole Wejse Svarrer Per Dabelsteen, Peter Lembo, Peter Thygesen, Soren Astrup, Søren Dilling, Thomas Dover and Tina Maria Winther