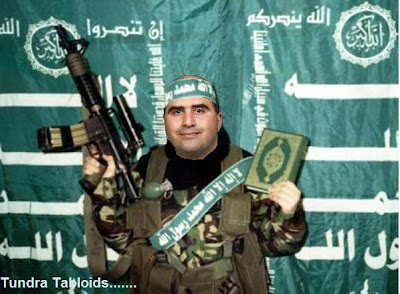 Major Jihad, Nidal Hasan:
There’s a lot more were I came from

A sign of desperation, or a plan for something big to happen? KGS

Al-Qaida calls on US Muslims to attack America

CAIRO (al-AP) – Al-Qaida’s American-born spokesman on Sunday called on Muslims serving in the U.S. armed forces to emulate the Army major charged with killing 13 people in Fort Hood.
In a 25-minute video posted on militant Web sites, Adam Gadahn described Maj. Nidal Hasan as a pioneer who should serve as a role model for other Muslims, especially those serving Western militaries.
“Brother Nidal is the ideal role-model for every repentant Muslim in the armies of the unbelievers and apostate regimes,” he said.
Gadahn, also known as Azzam al-Amriki, was dressed in white robes and wearing a white turban as he called for attacks on what he described as “high-value targets.”
Gadahn grew up on a goat farm in Riverside County, California, and converted to Islam at a mosque in nearby Orange County.
“You shouldn’t make the mistake of thinking that military bases are the only high-value targets in America and the West. On the contrary, there are countless other strategic places, institutions and installations which, by striking, the Muslim can do major damage,” he said, an assault rifle leaning up against a wall next to him.
Gadahn has been wanted by the FBI since 2004 and two years later was charged with treason. There is a $1 million reward for information leading to his arrest or conviction.
He has in the past posted videos and messages calling for the destruction of the West and for strikes against targets in the United States. His location is unknown, but he is believed to be somewhere along the border between Afghanistan and Pakistan.
Hasan has been charged in the Nov. 5 shooting that killed 13 people at Fort Hood, Texas. The 39-year-old Army psychiatrist remains paralyzed from the chest down after being shot by two civilian members of Fort Hood’s police force.
More here.