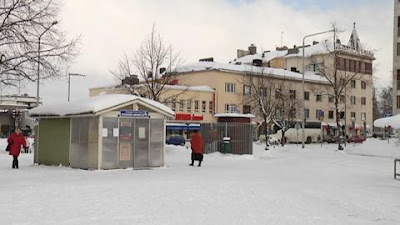 Charges have been filed for attempted murder. According to the report, the fight resumed when the wounded Kurds and “other Turks” were taken to the same hospital for treatment. KGS

NOTE: The Finnish paper Aamulehti reports: A Kurdish man was indignant about Turkish intentions to expand its business district, in which there’s a Kurdish kebab-pizzeria. Asian selvittely johti tappeluun. It was determined that it led to the brawl. The actual fight started on the following night, when the kebab-pizzeria closed its doors at 4 am.
When the owner and employees were getting into his car for the trip home, they were attacked by more than a dozen of Turks of Kurdish origin. Participants in the brawl had used knives, baseball bats and iron pipes. During the time of the brawl the kebab pizza restaurant owner received a serious injury to body in a knife attack, the other man received bad cuts to his hand.

A dispute between two Turkish kebab-pizzeria owners in the eastern Finnish city of Lappeenranta erupted into a gang fight early Thursday, sending a number of participants to hospital — where the fighting continued.
The men involved in the altercation were armed with knives, baseball bats and steel pipes.
Around 4 am, more than 10 men of Kurdish background attacked the owner and staff of a kebab-pizzeria in central Lappeenranta, who had just left the premises. A dozen participants were injured. Two were seriously injured, including the proprietor who received stab wounds and another who has a head injury.
Some were taken to South Karelia Central Hospital, where hostilities between the Kurds and the other Turks resumed.
South Karelia police have detained five participants, who may face charges including attempted murder and aggravated assault. Some of those involved are not residents of Lappeenranta, which lies close to the Russian border.
The chain of events apparently began with a verbal dispute on Wednesday afternoon between two pizzeria entrepreneurs — sparked by one man’s plans to expand operations near the other’s business.