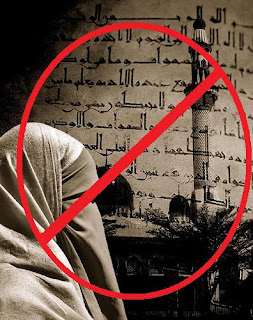 Hope lives in Turkey as fearless women rip up veils in the streets and stomp them under their precious feet. Go girls Go. Just think of the momentum that could have been generated for the transformation of key Muslim states, if the US actually had a freedom loving president in office. KGS

ANKARA, MARCH 4 – In a demonstration that was more unique than rare in Turkey, against the feared Islamization of the country, roughly a hundred lay women, belonging to the main opposition party, demonstrated in the southern city of Mersin, ripping apart dozens of turbans, the traditional Islamic Turkish veil, and trampling the pieces.
This was stated by local media, which published several images of the protest, which took place before the so-called ‘House of Ataturk’, situated on the street of the same name, in Mersin. Appearing for the protest were the “die hard” members of the Peoplés Republican Party (CHP), the political party founded in 1923 by Kemal Ataturk, the father of modern Turkey, with the name of the Peoplés Party, on the occasion, yesterday, of the anniversary of the abolition of the Califate in Turkey.
The initiative, more than being anti-Islamic, was against the CHP, which last year, in an attempt to gain back popular support and votes before the administrative elections of March 29, 2009, had launched a so-called “openness to the turban”, (a piece of clothing that the secular Turkish Constitution forbids being worn in universities and in all other government offices), thus irritating thousands of its own supporters, both men and women, mostly lay.
H/T: Baron Bodissey