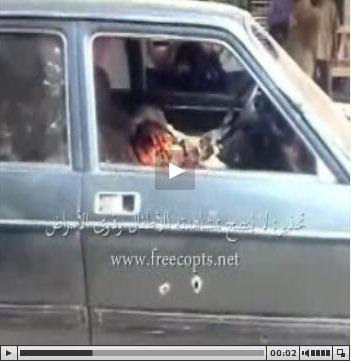 Since when do infidels in Muslim lands enjoy the full protection of the law? Muslim-Christian relations in Islamic lands can be accurately explained as open season on the dhimmi infidel. It’s like the segregated US South before the civil rights movement, but worse. KGS

An Egyptian court in the southern city of Assuit acquitted this week four Muslims accused of killing 61-year-old Farouk Attallah on October 19, 2009. In broad daylight and in full view of witnesses, the killers fired 31 bullets to his head before beheading him, in the busy village market place of Attaleen, near Dairout, 313 kilometers south of Cairo. The dead body was then dragged in the street, accompanied by shouts of victory. Free Copts website published a video of the disfigured body (warning, violent graphic content: video).
The judge presiding over the court on February 22, said that he was not satisfied that the testimony of the witnesses established that the imprisoned men were the killers. After the acquittal of Mohamad, Ashraf, Osama and Ahmad Hassouna, there was jubilation in the court room, with shouts of ‘Allah is Great’ and congratulations from all Muslims, including members of the state security forces who were present.
Christians were enraged over the acquittal, since similar cases would result in life imprisonment or execution for a Copt if the victim was a Muslim.
The verdict came as another wake-up call to many Copts, according to Peter Sarwat, the plaintiff’s attorney. “It sends a clear message that Coptic blood is extremely cheap.” he told Mariam Ragy of Katiba Tibia Coptic site. “This acquittal will make permanent the present culture of impunity enjoyed by Muslim aggressors against Copts.”.
H/T TROP