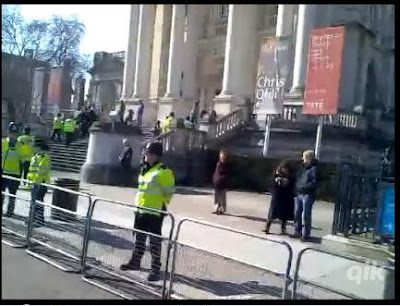 Yasmin Rassool : [I think the EDL are racist, homophobic, Nazi party and they shouldn’t be allowed to march in our streets.]

Oh and you can just imagine ol’ Yasmin and like ilk marching in anti-Israel rallies with their Hezbollah and Hamas flags waving in the wind while shouts of “death to Yahood” fill the air. Yeah, that’s more than likely the scenario. The EDL, while the TT can’t vouch for every member, and the face masks are not pleasent to look at, their leadership have made it very clear that their beef is not with law abiding Muslims, but with those who have every intention on spreading Islamic sharia throughout the UK, and changing the very fabric of British society to accomodate Islam. If that’s what the EDL truly stands for, then the TT stands with them any day of the week, face masks or not. KGS

GW: [To the cultural relativists, the shariah socialists, I proudly say: Our Western culture is far superior to the Islamic culture. Don’t be affraid to say it. You are not a racist when you say that our own culture is better.] Controversial Dutch MP Geert Wilders has shown his anti-Islam film in the UK’s House of Lords after overturning a ban on entering the country.
After the screening, the Freedom Party leader told a press conference Islam and democracy are “incompatible”.
Mr Wilders attempted to enter the UK last February, but was ordered to fly back to the Netherlands hours later. The ban was overturned in October.
The Home Office said it is opposed to “extremism in all its forms”.
Mr Wilders said the film and subsequent discussion was attended by around 60 people.
He told the press conference called for an end to immigration to Europe from Islamic countries, but said Muslims who agreed to obey the law of the land would be welcome to stay.
Several hundred members of the English Defence League (EDL) marched past the Houses of Parliament in supported of the Dutch politician.
Flanked by mounted police, they chanted football songs and waved Cross of St George flags.
They were kept apart from dozens of anti-fascist demonstrators, who gathered outside the Houses of Parliament, by police officers.
The Unite Against Fascism, organisation protested against the visit of Mr Wilders and the EDL march.
Yasmin Rassool from the group said: “I think the EDL are a racist, homophobic, Nazi party and they shouldn’t be allowed to march in our streets.”
The Dutch politician is a guest of cross-bencher Baroness Cox and UK Independence Party leader Lord Pearson.
Lady Cox said the visit had been a victory for free speech, saying: “You don’t have to agree but it is important to debate sensibly in a responsible and very democratic way.”
A Home Office spokesman said the government “regrets the decision by Baroness Cox and Lord Pearson to invite Geert Wilders to the House of Lords for a private showing of his film Fitna”.
“However, we currently have no reason to deny Mr Wilders admission to the UK,” he added.