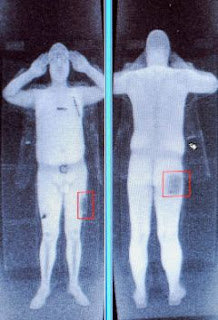 The Tundra Tabloids believes that it’s the first of many to come, then after an outbreak of Muslim ire about racial profiling, you’ll see a sudden drop in these incidents. Like the TT said before, the very people for whom these machines were meant for, will be exempted, it’s just a matter of time. KGS

A Muslim woman was barred from boarding a flight after she refused to undergo a full body scan for religious reasons.
The passenger was passing through security at Manchester Airport when she was selected at random for a full-body scanner.
She was warned that she would be stopped from boarding the plane but she decided to forfeit her ticket to Pakistan rather than submit to the scan. Her female travelling companion also declined to step into the scanner, citing “medical reasons” for her refusal.
The two women are thought to be the first passengers to refuse to submit to scanning by the machines, which have provoked controversy among human rights groups.
More here.