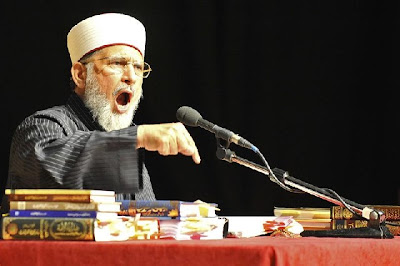 Sufi ‘infidel’ cleric: Tahir ul-Qadri
Not much to hype about, what’s a fatwa worth by a person the overwhelming majority of the Islamic Sunni and Shi’ite world will regard as an infidel? Sufis are routinely persecuted as apostates  from Islam. Also, ul-Qadri’s use of the word “innocents” is problematic.
He, (like other fatwas before him that supposedly condemn all kinds of terrorism) quotes in his 600 page fatwa, one of the leading authorities in Sunni orthodox Islam, Imam Abu Mansur al-Maturidi. The 10th century imam said that “anyone who permits the spilling the blood of “innocent people” are committing Kufr/disbelief and are outside the pale of Islam.”
Of course, there is no mention of the non-Muslim being included in the ranks of the “innocent”, even though he mentions being against terrorism in Israel and Palestine. Why not say who are these “innocents”? Sounding like a “moderate” while not addressing terrorist violence against non-Muslims should tell you all that you need to know about this fatwa and the guy who wrote it. Also, there is no mention in the fatwa of his calling for the end of the insititution and practice of jihad. KGS
NOTE: To prove the Tundra Tabloids point about Sufis being regarded as infidels, this video, (no English subtitles) is of the Sufi cleric himself, Tahir ul-Qadri complaining about the Sunni Taliban’s persecution of Sufis in Pakistan, during a conference.
Islamic scholar Tahir ul-Qadri issues terrorism fatwa
An influential Muslim scholar has issued a global ruling against terrorism and suicide bombing. Dr Tahir ul-Qadri, from Pakistan, says his 600-page judgement, known as a fatwa, completely dismantles al-Qaeda’s violent ideology.
The scholar describes al-Qaeda as an “old evil with a new name” that has not been sufficiently challenged. The scholar’s movement is growing in the UK and has attracted the interest of policymakers and security chiefs.
In his religious ruling, delivered in London, Dr Qadri says that Islam forbids the massacre of innocent citizens and suicide bombings.
Although many scholars have made similar rulings in the past, Dr Qadri argued that his massive document goes much further by omitting “ifs and buts” added by other thinkers.
He said that it set out a point-by-point theological rebuttal of every argument used by al-Qaeda inspired recruiters.

UPDATE: From the Sheik

I’m afraid, Brian Whittaker in The Guardian(well, CiF, actually) may be right.

The whole idea of waging “fatwa wars” with extremists is not only futile but anti-progressive and further entrenches the authoritarian tendencies in Islam. Issuing fatwas and promoting them, even in a good cause, is damaging because it ends up reinforcing the importance attached to fatwas in general.

He is of course responding to the story that an influential Muslim scholar has issued a global ruling against terrorism and suicide bombing.

Whittaker disagrees with Ed Hussein who also writes in The Guardian’s CiF that “Fatwas can be a force for good”.