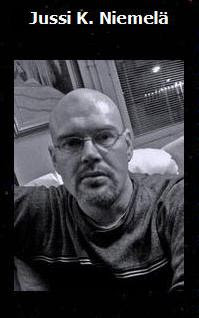 Jussi K.Niemelä
The Finnish Charles Johnson
The Tundra Tabloids took notice earlier this week of the recent Finnish YLE report concerning death threats leveled at Finnish lawmakers, by activist(s) using a US neo-nazi webserver, concerning their role in the promotion of multicultural policies that have led to vast increases in the number of immigrants/refugees to Finland from Muslim states.
The activist(s) also uploaded a video to You Tube that contains open calls to murder the Finnish president, Prime Minister and a host of other poltical officials. As of right now, the video is still viewable under the title: ” Tärkeä tiedoitus Suomalaisille “. Translation: “Important announcement to Finns”.
What’s also interesting is how the Finnish blogosphere has been reacting to the incident. One site that has been brought to the TT’s attention is the blog of Jussi K.Niemelä, who’s both a humanist and a sceptic, a critic of Islam in particular and of religion in general, as well as an antagonist of the anti-Islamization and anti-mass immigration movement in Finland of which the anti-mass immigration forum website, Hommaforum, plays a very large role.
It goes without saying that Jussi K.Niemelä is also a very vocal critic of Jussi Halla-aho, the Helsinki politician who was fined by a Finnish district court for “disturbing religious sensibilities”. Halla-aho wrote on his blog Scripta, in post highlighting the Finnish state’s discrimination against ethnic Finns, that the Muslims’ prophet Mohamed was a pedophile. Never mind the fact that Halla-aho was correct in pointing that fact out, for the Finnish court decided long before the trial began, that the truth was not a defense.
What’s strangely familiar about Niemelä, is that, like the thoroughly discredited US libel blogger, Charles Johnson of Little Green Footballs, Niemelä voices a strong critique of Islam but also appears more than willing to waste good time and energy pursuing Christianity as well as Judaism (read = circumcision) with an almost equal vigor, while finding racists and nazis in every corner.
In his one dimensional blog post about the racist website and the owner’s call for the murder of Finnish politicians, Niemelä makes references to Jussi Halla-aho and the Hommaforum website, as if these fine people would have anything to do with, or responsible for,  the rise of racism, nazism and death threats.
As an American, what I deem both ludicrus and insulting, is Niemelä’s alluding to Halla-aho’s affection for weaponry, (a hobby shared by hundreds of thousands of Finns, and hundreds of millions of Americans) as being somehow indicative of a larger trend of evil. Apparently for Niemelä, Halla-aho’s blog posts have such great influence in Finland, that surely the whack-job racist in question is one of his followers as well as belonging to the Hommaforum movement.
Really? I’m not at liberty to say who, but one astute Finnish blogger stated to the TT earlier today that: “It is also possible that it is an ANTIFA operation designed to discredit the immigration critical movement.” Of course, one dimensional thinking wouldn’t allow for that possibility, right? No, it’s got to be the handiwork of those “waycists” that Halla-aho commands with such a strong arm, the very ones, mind you, who are offering reasonable, rational argumentation on a daily basis against the highly destructive multicultural experimental policies of the Finnish Left-wing. KGS
NOTE: While the Islamization of Europe and Finland continues, the owner of, Go rin no sho, scours the internet looking for the mythical unicorn of anti-Islamization Nazis. 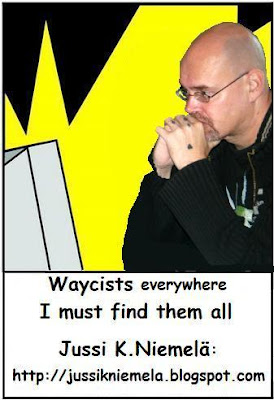