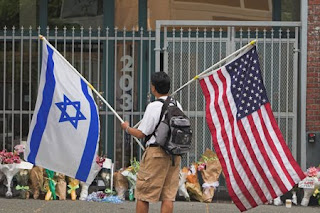 This is an often debated subject for many who follow US-Israeli relations. Why is it, they ask, that the US continues to be one of Israel’s most staunch supporters after all these years? Why is it that after decades of anti-Israel propaganda being disseminated by its media and on its campuses -with the latter having been accurately described as being oasises of tyranny in a sea of democracy- support for Israel continues to remain strong?
Americans, by their very nature hate tyrants, thuggish regimes and anti-liberal ideologies, Arabs regimes and their supporters represent everything that the average US citizen loathes. The Arab Middle East, including the less totalitarian of these states, still represent anti-freedom and oppression, which is something that Americans will never identify with.
Israel on the other hand, regardless of the bad press and propaganda campaigns, represents shared values and a “can do” work ethic that Americans can identitfy with. No one holds the belief that both are perfect, but they do realize that they are light years ahead of Israel’s enemies, and while the latter might be pitied, there is no spark of solidarity with them.

The reason why support for Israel within the US government continues to be strong, is in part due to being in touch with “middle America”, but also because it serves US self interests. All this explains why US relations with the Jewish state of Israel will continue to strong, now and into the future. KGS

Americans love Israel Even More Than You Think

By Barry Rubin
International relations isn’t a popularity contest. But public opinion polls can be useful in countering myths and examining the impact of policymaker, elite, and media campaigns on the masses.
Which brings us to Gallup’s latest poll measuring how Americans feel about different countries. The more one examines the results, the more amazing they are. Americans two favorites are, not surprisingly, fellow English-speakers Canada and the United Kingdom. Then come-Americans are very forgiving-two former enemies, Germany and Japan.
And next on the list is Israel. Even the basic numbers-67 favorable, 25 percent unfavorable-are impressive. But that’s only the beginning. Around 10 percent of Americans don’t like anybody, and only one-fourth of those 25 percent nay-sayers on Israel, that is 6 percent, are really hostile.
In other words, the percentage of Americans who hate Israel is only 6 percent and the number who single out Israel for partly unfavorable views among other popular countries adds about 10 percent more.
And since 10 percent of Americans say they like Iran (85 percent don’t), having only a bit more than that number really disliking Israel isn’t very impressive.
After 20 years or so of intensive media criticism, hostility on campuses, double standards, and controversy that’s nothing short of remarkable.
This conclusion is intensified further by considering the equivalent results for the Palestinian Authority (PA). Remember that one can like both Israel and the PA. Moreover, the PA receives constant good publicity in the media, campuses, and among policymakers as moderate and friendly to the United States. Yet only 20 percent are favorable to the PA and a whopping 70 percent are negative.
Even that understates the results. How popular is the PA? Well, it’s at the same level as Yemen, and that’s after a suicide bomber trained and indoctrinated there was captured trying to blow up a U.S. airliner near Detroit.