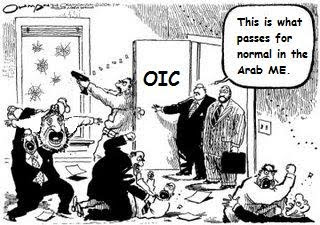 Professor Efraim Karsh, the head of Middle East and Mediterranean studies at King’s College London, has an excellent article at the NYT. Karsh offers a convincing argument against the notion that solving the Arabs’ conflict with Israel first, will remove the Iranian threat later.
The idea of a monolithic Arab/Muslim block has blindsided many an “expert” and political leader, and with the stakes getting higher, it has to be countered in a meaningful way. Karsh convincingly does that. Now if only they will listen. KGS
Muslims Won’t Play Together
WE may scoff at the idea that the Olympic Games have anything to do with the “endeavor to place sport at the service of humanity and thereby to promote peace,” as the Olympic charter enshrines as its ideal. But at least nations across the world were able to put aside differences for two weeks of friendly competition in Vancouver.
A mundane achievement, perhaps, but it’s one that’s beyond the grasp of the Islamic world. The Islamic Solidarity Games, the Olympics of the Muslim world, which were to be held in Iran in April, have been called off by the Arab states because Tehran inscribed “Persian Gulf” on the tournament’s official logo and medals.
It’s a small but telling controversy. It puts the lie to the idea of the Islamic world as a bloc united by religious values that are hostile to the West. It also gives clues as to how the United States and its allies should handle two of their most urgent foreign policy matters: the Iranian nuclear program and the Israeli-Palestinian conflict.
[…]
In these circumstances, one can only welcome the latest changes in the Obama administration’s Middle Eastern policy, which combine a tougher stance on Iran’s nuclear subterfuge with a less imperious approach to the Arab-Israeli conflict.
Secretary of State Hillary Clinton’s two-track plan — discussion with Tehran while at the same time lining up meaningful sanctions — is fine as far as it goes. But a military strike must remain a serious option: there is no peaceful way to curb Iran’s nuclear ambitions, stemming as they do from its imperialist brand of national-Islamism.
Likewise, there is no way for the Obama administration to resolve the 100-year war between Arabs and Jews unless all sides are convinced that peace is in each of their best interests. Any agreement between Israel and the Palestinians is far less important than a regional agreement in which every Islamic nation can make peace with the idea of Jewish statehood in the House of Islam.
And that, depressingly, is going to be a lot harder to pull off than even the Islamic Solidarity Games.
Read it ALL