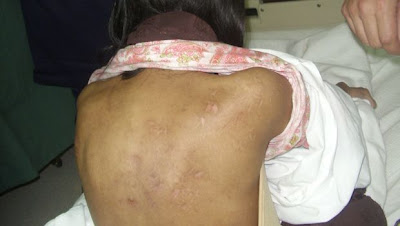 After reading and hearing of one case after the other about Saudis mistreating their hired foreign (and usually non-Muslim) help, through physical abuse, deprivation, slavery and torture, one can safely conclude that those who are entrusted with safeguarding the “treasures of Islam”, exemplify the nature of that ideology.
These are the people who live in the lap of luxury, go to their mosques, pray, and have every awakened moment peppered with the ideology of Islam in one form or another. So there can be no doubt that what these people are hearing and being taught, is contributing in a large way to the these various acts of barbarity. KGS

JEDDAH: Erfan & Bagedo Hospital in Jeddah has rejected the request of Safa police to hand over an Indonesian maid, who has been receiving treatment at the hospital, to her sponsor.
The maid was admitted to hospital on Dec. 20, 2009 after she fell from the third floor of her sponsor’s apartment building.
The maid, Sariti Haiti, told hospital authorities that she had been tortured by her sponsor. She was brought to hospital by Red Crescent officials with injuries and bruises on different parts of her body. Initial reports said the maid’s backbone and neck were broken after falling from the building.
Doctors at the hospital observed that the maid had been beaten up and tortured and they found signs of torture on her back in the form of burns and signs of lashes. They also detected internal bleeding and an injury to her head. The treatment bill reached SR120,000.
Dr. Ahmed Erfan, deputy general manager of the hospital, said the maid was working for a Saudi woman. “We contacted her sponsor to pay the bill. A man responded from the other side and acknowledged the maid worked for them but refused to pay the bill,” he said.
The hospital then contacted the Indonesian Consulate, which refused to accept the hospital’s letter by hand. It had to send the letter then by fax. After a week a consulate representative came to inspect the condition of the maid but he did not come back again. “After two months we wrote a letter to Jeddah Gov. Prince Mishaal bin Majed, who promised he would follow up the matter,” he said.