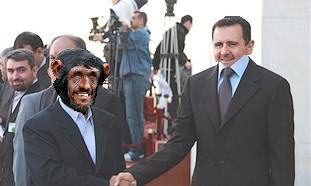 Moody the Monkey and Chinless Wonder:
United in their quest for the
genocide of the Israeli people
They really do mean it. Remember folks, the Obama administration just opened diplomatic ties with the Syrians, this is the response to the opening of that embassy.  Re-establishing diplomatic relations with a state that sponsors international terrorism, only serves to encourage more irresponsible (normal for Israel’s enemies) behavior by these regimes, who can always be expected to interprit “good will” as being soft headed.
Just look how quickly Gadaffi’s Libya divested itself from its own WMD’s program in the wake of the US led Coalition’s implementation of UNSCR 1441, which meant the resuming of hostilities against Saddam Hussein’s Iraq. The Libyan’s didn’t hand over its entire nuke program out of the good of thier heart, they were scared to death that the US would soon turn its sights on the government of Libya. KGS
NOTE: The enemies of America are just laughing in front and in back of, both Obama and his policies.

In joint Damascus press conference, Assad calls US stance on Iran “new colonialism.”
The United States should pack up and leave the Middle East and stay out of regional affairs, Iran’s president said Thursday during a visit to Damascus that follows a string of US efforts to break up Syria’s 30-year alliance with Teheran.
Iranian President Mahmoud Ahmadinejad said Arab nations will usher in a new Middle East “without Zionists and without colonialists.”
“(The Americans) want to dominate the region but they feel Iran and Syria are preventing that,” Ahmadinejad said during a news conference with Syrian President Bashar Assad. “We tell them that instead of interfering in the region’s affairs, to pack their things and leave.”
He said that “if the Zionist regime wants to repeat its past mistakes, this will constitute its demise and annihilation.”
Ahmadinejad said Iran, Syria, Iraq and Lebanon will stand against Israel.
Assad signaled his strong support for Iran, saying America’s stance on Iran “is a new situation of colonialism in the region.”