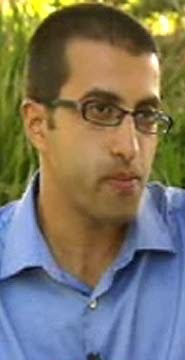 Mosab Hassan Yousef
A true humanitarian!
The only Muslim/Arabs that have friendly views towards Israel and humanity, are the ones who either lean more heavily on their humanist side, or leave Islam altogether. If they are real tradtionalists, they hate the Jews, it’s that simple. KGS

UPDATE: TINSC observes: “Given the timeless assault on the Jewish people in every conceivable way, it is nice to know that inside a vast sea of evil, somebody knew right from wrong and acted to save lives.”

The son of one of Hamas’s founding members was a spy in the service of Israel for more than a decade, helping prevent dozens of Islamist suicide bombers from finding their targets, it emerged today.
Codenamed the Green Prince by Shin Bet, Israel’s internal security service, Mosab Hassan Yousef, the son of Hamas co-founder Sheikh Hassan Yousef, supplied key intelligence on an almost daily basis from 1996 onwards and tracked down suicide bombers and their handlers from his father’s organization, the daily Haaretz said.
Information he supplied led to the arrests of some of the most wanted men by Israeli forces, including Marwan Barghouti, a Fatah leader often tipped as a potential president who was convicted of masterminding terrorist attacks, and one of Hamas’ top bomb-makers Abdullah Barghouti, who is no relation of the jailed Fatah chief.
Mr Yousef, a 32-year-old convert to Christianity who now lives in California, has revealed the intrigues of his years as a spy in a new book called Son of Hamas, much to the concern of Shin Bet, whose operations will be revealed in detail. While the revelations may give a boost to Israel’s intelligence service, whose external counterpart Mossad is still grappling with the diplomatic fall-out of last month’s Hamas assassination in Dubai, there will be concern that the account may give too many insights into the murky world of espionage.
However, Mr Yousef’s work will be far more damaging to Hamas, whose brutality he denounced. Dubai police have suggested that Mahmoud al-Mabhuh, the top Hamas militant found dead in a hotel room in the emirate on January 20, may have been betrayed by an insider from the Islamist movement itself.
And Mr Yousef had harsh words for the movement that his father helped form, and which now rules the Gaza Strip after a bloody takeover in summer 2007. “Hamas cannot make peace with the Israelis,” he told the daily. “That is against what their God tells them. It is impossible to make peace with infidels, only a cease-fire, and no one knows that better than I. The Hamas leadership is responsible for the killing of Palestinians, not Israelis.”
More here.