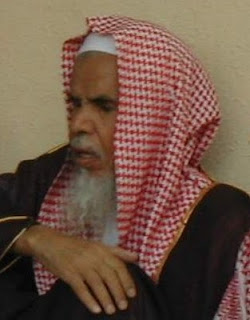 Sheikh Abdul-Rahman al-Barrak
CONFIDE AND WE’LL KILL YOU
Such is life in the nightmare called Saudi Arabia, where warped views on relations between the sexes, is promoted and validated by such learned men of Islam like Sheikh al-Barrak. Treating women like sinful cattle is the arch aim of these Islamic clerics, its the glue that keeps their Islamic world from falling apart. KGS
SAUDI ARABIA:SHEIKH’S FATWA AGAINST PROMOTERS OF PROMISCUITY
BEIRUT, FEBRUARY 23 – The death penalty should apply to those who advocate ‘promiscuity’ between men and women in Saudi Arabia. Such is the conviction of Sheikh Abdel Rahmad Barrak, one of Saudìs most popular imams, who today issued a ‘fatwa’ (a legally binding opinion) against “the modernisers” who are calling for the abolition of the strict boundaries imposed by Wahabi doctrine.
From the pages of his blog hosted on the portal www.islamlight.net, the 78 year-old sheikh has been having a go at some of his colleagues in Saudi and abroad who have started talking about “reforms” in the application of Sharia law and asking for greater tolerance with regard to forms of promiscuity in schools and workplaces.
“It’s a corrupt practice that allows that which Islam forbids, namely that men and women should confide in each other”, opined Barrak, who continued that “whoever allows this promiscuity is not only a panderer but also an infidel who distances himself from the path of Islam”. Given this, the sheikh concluded that such people “without repentance, will be killed”. In 2007, Barrak made news for a fatwa issued against Shiites, referred to as “infidels”, and the following year for another fatwa against Christians and Jews, described as “unbelievers”.