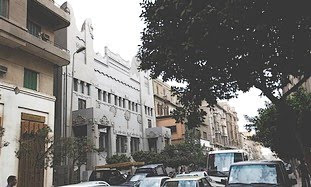 A man hurled a suitcase containing a makeshift bomb at Cairo’s main downtown synagogue in the early hours Sunday morning, causing no injuries or damage, police said.
According to the police report, a man entered a hotel located on the fourth floor of a building across from the synagogue at around 3 a.m. and as he was checking in, abruptly threw his suitcase out the window.
The case contained four containers of gasoline each attached to a glass bottle of sulfuric acid meant to shatter on impact and ignite the makeshift bomb, said police, speculating that the man may have panicked.
The bag, which also contained clothes, cotton strips, matches and a lighter, fell onto the sidewalk in front of the hotel and briefly caught fire before being extinguished. There were no injuries and no damage to the historic synagogue.
The suspect fled the scene and is now being sought by police