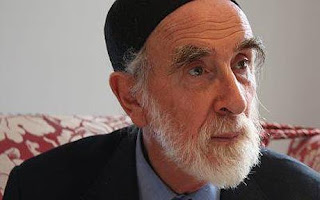 Ian Dallas/Shaykh Abdalqadir as-Sufi:
As a former Leftist bohemian, becoming a Muslim
was not a difficult transformation. We both loathe capitalism
Socialism is a religion, pure and simple. So it shouldn’t come as a surprise that Leftists find a natural ally in Islam. They both hate Israel, US style dynamism based on individualism and freedom….. and the capitalist system. So when socialist “daddy long eyebrows” becomes a Muslim, it’s not a great stretch between belief systems, both are totalitarian ideologies, so Ian Dalls, what’s not to like and love?

NOTE: The amount of aid Israel receives from the US to help maintain its military edge, represents only 5% of Israel’s GNP. The man is a raving loon.

Radical Muslim leader has past in swinging London

Born into a landowning clan in Ayr, south-west Scotland, he had left the family estate for London and quickly fell in with a host of stars after writing and directing a series of television hits.
He directed a play starring Albert Finney, wrote versions of the classics Jane Eyre and Vanity Fair for the BBC and even acted in the Federico Fellini classic 8½.
But these days Mr Dallas is famed for very different reasons as the leader of an extreme Islamic group with thousands of followers across the world.
He has called for Britain to be run by a Muslim council and likened the war in Afghanistan to the Holocaust.
Shaykh Abdalqadir as-Sufi, as he is now known, believes the Islam world will conquer the “Jewish dominated” West with an hardline interpretation of Islamic law.
“(Israel) knows that without its massive defence subsidy from the USA it could not last one financial year,” he states.
Abdalqadir’s teachings range from the claim that movies and football “degrade the proletariat” to calls for Middle Eastern-style monarchical rule in Britain supported by a moral body of Muslims.
Now based in Cape Town, Abdalqadir, 79, claims Western governments stage terrorist acts to detract from the fact that capitalism has failed. He says both Richard Reid – the “shoe bomber” who tried to blow up a plane in 2001 – and Umar Farouk Abdulmutallab – the man behind the attempted bombing of a plane bound for Detroit on Christmas Day – were both “planted” by the CIA.
“It is time for the enslaved billions of our world today to fear no more the exploding shoes and underpants of the idiot agents of capitalism and to learn what Islam really is,” he states.
He says Britain is on “the edge of terminal decline and it is the “British Muslim population that alone can revitalise this ancient realm.”