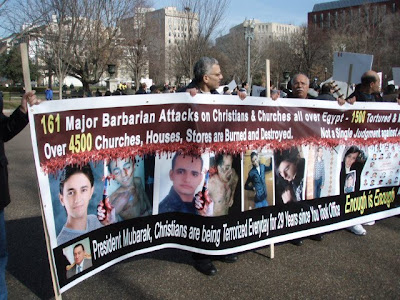 Interesting how the Egyptians and other Arab regimes continue their rhetoric against Israel, while they insist that their own internal issues are off limits. Christian Copts have been discriminated against by the Egyptian Muslim majorty for centuries, and highlighting that fact happens to be one of the more sore spots for Cairo. KGS

The drive-by shooting of Copts as they left Christmas Eve mass on January 6 in the southern Egyptian town of Nag Hammadi has shocked and enraged Copts all over the world. (http://www.aina.org/news/20100107150122.htm) International condemnations poured in after the attack, which left six Copts dead and nine injured, with Italy, Canada, France, the Vatican, the US Congress, and the European Parliament, expressing their concerns about the safety the Copts in Egypt. In reply, a statement by the Egyptian Foreign Ministry said, “It is an internal Egyptian matter that no foreign party is allowed to consider.”
The shootings triggered unprecedented protests by Copts inside Egypt and abroad. Explaining this Coptic reaction, Coptic intellectual Magdi Khalil said on Life TV on February 4 “This incident is not like the rest. Copts feel they are in danger, and a bigger one is forthcoming. They finally have realized that the crimes against them are not individual incidents but rather ‘crimes against humanity’ planned by the Egyptian State itself.”
[…]
The Coptic Diaspora has always been accused by the Egyptian regime of “tarnishing” Egypt’s image by presenting Coptic problems before foreign governments instead of solving them inside the country.
“Weakening their role as a pressure group abroad is a way to sabotage Coptic efforts in obtaining real gains,” Khalil said, “and depriving the Copts in Egypt from the lungs through which they breath. The real work for the Coptic Issue is done abroad, and not inside Egypt. Coptic emigrants are effective on the political and human rights levels.”
According to Khalil, the Foreign Minister, Ahmad Abu el-Gheit, held a secret meeting on January 19 with all his aides and ambassadors — excluding the two Coptic ambassadors — around the world to announce a “new strategy” to encounter the activities of the Coptic Diaspora. Abu el-Gheit said the Coptic Diaspora is a “fifth column,” “enemies of Egypt,” “who have a separate identity” and “all measures ought to be taken in all Egyptian Embassies around the world to curb their activities.” The second part of the “new strategy” is to “convince the homeland Copts that the activities of the Copts abroad will increase Muslim attacks on them, and the outside world will not be able to save them.” Khalil said that he got this information from a Muslim ambassador who attended the secret meeting and who disagreed with the policy.
Reacting to world pressure President Mubarak said on January 25, during his speech to mark national Police Day, that there have been “continued attempts” to disrupt national unity in Egypt and provoke sectarian strife in the country. “There exist extremists on both sides, and there are individuals who try to exploit Egypt’s ordinary people. We must resist these efforts with all our powers.” These comments were viewed as a threat directed at the Copts, particularly in North America, who are always vocal about the persecution of Egypt’s Copts.