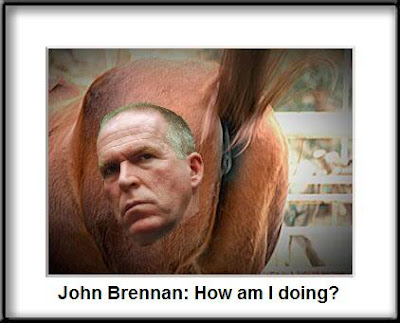 Brennan: “They are not jihadists, for jihad is a holy struggle, an effort to purify for a legitimate purpose, and there is nothing — absolutely nothing — holy or pure or legitimate or Islamic about murdering innocent men, women and children,” Brennan said. “We are not waging a war against terrorism because terrorism is but a tactic that will never be defeated, any more than a tactics of war will. Rather, such thinking is a recipe for endless conflict. … We are at war with Al Qaeda and its extremist allies, and any comment to the contrary is just inaccurate. We will destroy that organization.”

Hey Brennan, you creep, how about cracking open a Koran and see just what exactly the Koran says about jihad? You moron. Oh, I forgot, you already read the Koran and know exactly how the Islamic doctrine of Jihad plays a crucial role in the spreading of that miserable ideology, and are just lying to the public at large. You creep.

Qur’an 2:190-193 “Fight in the cause of Allah those who fight you, but do not transgress limits; for Allah loveth not transgressors. And slay them wherever ye catch them, and turn them out from where they have Turned you out; for tumult and oppression are worse than slaughter; but fight them not at the Sacred Mosque, unless they (first) fight you there; but if they fight you, slay them. Such is the reward of those who suppress faith. But if they cease, Allah is Oft-forgiving, Most Merciful. And fight them on until there is no more Tumult or oppression, and there prevail justice and faith in Allah; but if they cease, Let there be no hostility except to those who practise oppression. ”

Qur’an 5:35 “Believers, fear Allah and seek the way to approach Him, striving hard [fighting Jihad] with all your might in His Cause [deception, death, and damnation] that you may be successful. As for the disbelievers [previously defined as Christians], if they had everything on earth, two times over, to give as ransom for the penalty of the Day of Doom, it would never be accepted from them. Theirs will be a painful torment. They will desire to get out of the fire, but they shall not be released from it. They shall have an everlasting punishment.”¨

Qur’an 9:5 “When the sacred forbidden months for fighting are past, fight and kill the disbelievers wherever you find them, take them captive, beleaguer them, and lie in wait and ambush them using every stratagem of war.”

Qur’an 9:29 Fight those who believe not in God nor the Last Day, nor hold that forbidden which has been forbidden by God and His Apostle, nor acknowledge the religion of truth, [even if they are] of the People of the Book, until they pay the Jizyah with willing submission, and feel themselves subdued.

Quran 33:22 “When the Believers saw the clan’s forces, they said: ‘This is what Allah and his Messenger promised us.’ It added to their faith, obedience, and submission. Among the Believers are men who have been true to their covenant with Allah (and have gone out for Jihad (holy fighting)). Some have completed their vow to extreme (and have been martyred) fighting and dying in His Cause, and some are waiting, prepared for death in battle.”

What about the Hadiths Mr.Stupid, you know full well that they have as much importance to the Mohammedan as the Koran itself. Oh, you’re probably one of those who address ignorant non-Muslim audiences about how peaceful Islam is, without ever once mentioning the Hadiths, you pickle brain.

Bukhari:V4B53N412 “Allah’s Apostle said on the day of the conquest of Mecca, ‘There is no migration now, only Jihad, holy battle. And when you are called for Jihad, you should come out at once.'”

Bukhari:V4B52N44 “A man came to Allah’s Apostle and said, ‘Instruct me as to such a deed as equals Jihad in reward.’ He replied, ‘I do not find such a deed.'” “Can you, while the Muslim fighter has gone out for Jihad, enter a mosque to perform prayers without ceasing and fast forever?’ The man said, ‘No one can do that.'”

Bukhari:V4B52N50 “The Prophet said, ‘A single endeavor of fighting in Allah’s Cause is better than the world and whatever is in it.'”

Noble Qur’an 2:190 Footnote: “Jihad is holy fighting in Allah’s Cause with full force of numbers and weaponry. It is given the utmost importance in Islam and is one of its pillars. By Jihad Islam is established, Allah’s Word is made superior (which means only Allah has the right to be worshiped), and Islam is propagated. By abandoning Jihad Islam is destroyed and Muslims fall into an inferior position; their honor is lost, their lands are stolen, their rule and authority vanish. Jihad is an obligatory duty in Islam on every Muslim. He who tries to escape from this duty, or does not fulfill this duty, dies as a hypocrite.”

Tabari VIII:153/Ishaq:533 “Abdallah Rawahah encouraged the men, saying, ‘By Allah, what you loathe is the very thing you came out to seek—martyrdom. We are not fighting the enemy with number, strength, or multitude, but we are fighting them with this religion with which Allah has honored us. So come on! Both prospects are fine: victory or martyrdom.’ So they went forward.”

Watch Obama’s best and brightest work the crowd of Mohammedans gathered to get their ears tickled. To be fair, the Bush administration did its share of groveling and manure shoveling to the tune of how Islam is such a religion of peace. But this twerp takes it even further, and deserves every ounce of condemnation he gets. KGS