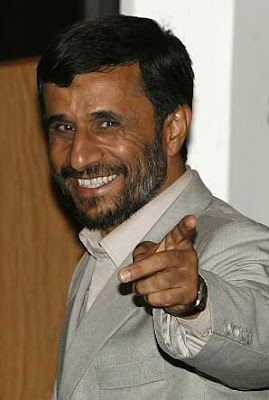 Moody: Didn’t she know that we’re an Islamic state,
and that the Islamic ideology has large a militaristic component?
The Tundra Tabloids would have advised Clinton to refrain from making such a public ass of herself, but one must admit the humorous side to seeing her look like such a fool on the international stage. It’s pure amatuer hour in the Obama administration. 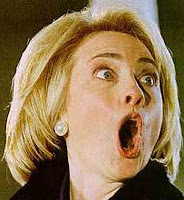 News flash for Hillary, any government that controls or intimidates its people through the use of its military and/or police force, is a military dictatorship. There’s no difference in that respect, between the Iranian regime* and Hezbollah, Hamas, Fattah, N.Korea, Sudan, and Zimbabwe (and a host of others).  KGS
NOTE: [The just mentioned states, by the way, make up the pantheon of rogue states and entities that the UN showers its approval on, in the form of looking between its miserable fingers and allowing them to sit on its Human Rights Council and on its Security Council.]
Ahmadinejad not taking Clinton comments “seriously”

TEHRAN, Feb 16 (al-Reuters) – President Mahmoud Ahmadinejad dismissed on Tuesday U.S. accusations that Iran was moving toward a military dictatorship, saying the U.S. military budget was 80 times larger than that of the Islamic Republic.

U.S. Secretary of State Hillary Clinton said on Monday that the United States believed Iran’s Revolutionary Guards were driving the country towards military dictatorship and should be targeted in any new U.N. sanctions.
“We don’t take her comments seriously,” Ahmadinejad told a televised news conference, adding that the entire Iranian population of more than 70 million were protecting Iran’s independence and its Islamic revolution.
He said the United States had some 300,000 troops stationed in the Middle East and was involved in wars in the region.
“These comments she (Clinton) is making are not wise,” Ahmadinejad added. (Reporting by Reza Derakhshi; writing by Fredrik Dahl; editing by David Stamp)

*NOTE: Regime, is any government that no longer represents the will of the people.