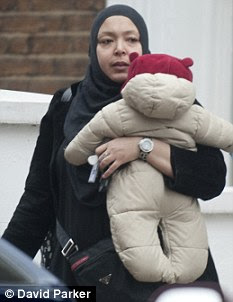 Pumping them out and living high on the hog
As the Bob Dylan lyric in the song Jokerman states: “Steal a little, and they put you in jail. Steal a lot, and they make you king.” The moron bureaucrats responsible for this nonsense should be held accountable. KGS

Single mother-of-six finds £2m mansion on the net… and then gets YOU to pay £7,000 a month rent

A single mother-of-six is getting more than £80,000 a year from the taxpayer to live in a £2million mansion in an exclusive London suburb.
Essma Marjam, 34, is given almost £7,000 a month in housing benefits to pay the rent on the five-bedroom villa just yards from Sir Paul McCartney’s house and Lord’s cricket ground.
She also receives an estimated £15,000 a year in other payouts, such as child benefit, to help look after her children, aged from five months to 14.
The four-storey house in Maida Vale has five bedrooms, two bathrooms, a double living room, large fitted kitchen-diner with French doors on to the landscaped garden and a state-of-the art buzzer entry system.
Astonishingly, it is understood Miss Marjam found the house on the internet through a private letting agency, rather than waiting for Westminster council to give her a vacant property on their books.
She then applied to the council for the £1,600-a-week benefit – the maximum amount the council allows.
Miss Marjam said: ‘I moved here at the beginning of the month as I’m entitled to a five-bedroom house.